Danish architecture studio CEBRA has designed the facades of a car park for Lego in Billund, Denmark, which features a road layout based on the toy company's City road plates.

The facades, created by CEBRA, cover a five-storey car park designed by architecture studio Ravn Arkitektur, which will be used by people working in the Lego offices and visiting the nearby Legoland.

The design used across the facades is directly based on Lego's City road plates, which were originally created in 1977 and are still being sold by the company.

CEBRA chose to base the design on the city plates after discussions with Kirkbi – Lego's holding company – to find a visual identity that tied into a Lego product.

"We had a really good and open design process with the client, and we suggested nearly 40 different ideas to discuss," explained CEBRA founding partner Mikkel Frost.

"All the ideas revolved around the LEGO bricks or products. The scope was to somehow reflect the company, their identity and their amazing inventions," he told Dezeen.

The entire facade is clad in aluminium panels that are directly upscaled from the original road plates. The patterns across the facades are made up from nine different section types. 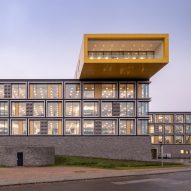 "First of all, they are clearly a LEGO product while at the same time they have to do with traffic and driving," said Frost.

"But they also turn out to be extremely flexible in terms of designing a versatile and interesting facade pattern even though there are only a few different plates. My favourite detail is the solitary, circular road appearing as a dot on the elevation."

The sizes of the perforations in the facade are based on the dimensions and ratios of the standard Lego brick.

This means that bricks can be attached to the smaller perforations in the facades.

The car park stands directly alongside the offices designed by CF Møller Architects for Lego, which incorporate giant bricks in the facades and near the BIG-designed Lego House that looks like a stack of building blocks.

"All of the buildings that make up Lego Campus are somehow inspired by the Lego product – that's visually evident," explained Frost.

"But they also express the very identity of the Lego Group. The buildings on the campus are all high quality, creative and playful."

"In my opinion, we didn't design a fun facade, and that wasn't our scope either. We aimed for playfulness while celebrating imagination," he added.

The fact that one can use the notorious road plates for a facade demonstrates how playing and creativity is closely connected."