As the 2020s begins, Aaron Betsky predicts that architects in the new decade will focus on reuse, flexible spaces and earthy materials.

Crystal balls are notoriously cloudy, tea leaves open to many interpretations, and, according to science fiction films such as Blade Runner, by now we would all be living with replicants. Future predictions are more wishful – or dreadful – scenarios, fairy tales we tell ourselves about our destiny. So herewith some stories for a century that is exiting childhood and moving into early adulthood.

The Roaring Twenties Redux will be about reuse. If the last decade in design saw the construction of monuments to the victory of corporatised computer and communication technologies – which is to say blobs, super-thin skyscrapers for the super-rich, and a mindless minimalism befitting an age in which style is just an app that creates a social media layer – the next one will see the return of the real.

Our agenda must be to reuse, rethink, reimagine, and relive our present

That means a realisation that the earth is ours to lose; or rather, that we are engaged in self-destruction that points to an imminent post-human future, not just as post-deconstructivist theory, but as fact. Our agenda must therefore be to stop the waste of natural resources we cannot renew, stop the pollution, and reuse, rethink, reimagine, and relive our present.

Even if architects still want to make stand-alone buildings, preferably as large and as "different" or "creative" as possible, they will have fewer opportunities to do so. Land is becoming scarce, as are building materials. Codes are becoming more and more restrictive.

The iron laws of economics, at least as conceived from the perspective of those who have the capital and thus can commission buildings, argue more and more for the reuse of what we have. Carl Elephante, the former president of the American Institute of Architects, predicts that by the middle of the decade at least a third of American architects' work will be in repurposing, restoring, and refurbishing existing buildings.

In that sense, perhaps the very idea of progress is now in question. Whether or not the future is going to be any better seems to be very much an open question, at least for the vast majority of humanity. The last hope of a technological utopia lies in carbon sequestration, wetland reconstruction, flood control, desalination plants, and other gizmos of a hitherto unimaginable scale that will try to fend off our own seemingly inevitable self-destruction. If you want jobs, that is where to go.

The perfection of architecture, however, like that of any other human creation, turns out to be a self-defeating endeavor, leaving us only to admire what we already have. The aesthetic of the new decade will be one of the New Normality.

Or, if you are of the Object Oriented Ontology school, the repurposing of all the artifacts and organic material around us – including the human body – to continually reconstruct revelatory moments within the universe-spanning "hypersphere" we all inhabit. Kitbashing, collage, and purposefully boring architecture will be the way to make your almost invisible mark. Memes will be more effective than monuments.

Architects will face the increasing fluidity of our society

Not only will the arrow of time begin to dissolve, so might the structures and strictures that define space. The idea that you build a place to live, work, or play with a fixed shell that only permits a certain set of uses in a particular place has long seemed absurd to many architects.

Architects will face the combination of advances in how we can condition spaces other than by isolating them and the increasing fluidity of our society, from the mass movements of people those climate upheavals are and will increasingly cause, to the continual reformation of companies, states, and families at rapid rates, to the very slipperiness of personal identity. That will make it likely that we will finally see the nomadic dreams of the likes of Archigram and Superstudio come to be.

What interests me most within the range of possibilities is, on the one hand, the possibility of fluid communities, on the model of music or art festivals and, on the other hand, the notion that we should think of our heating and cooling systems as only conditioning space where and when people are present. The boxes are breaking apart.

We will increasingly build in and with the earth, rather than on it

Certainly, this means we will see new forms and materials enter into the mainstream of architecture. I think mass timber is a bit of passing fad; the energy it takes to produce it is tremendous, and the mono-cultures of planted forests it necessitates are not exactly logical from a sustainability standpoint.

I do think that experiments in grafting human-made and natural materials together, so that the work of architecture can either be a continuation or elaboration of trees, bushes, or fields, or the extension of grids through growing material, may lead some of the most hopeful possibilities – even if the Hobbit-like aesthetics this implies gives my old fashioned sensibilities pause. 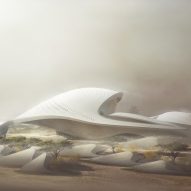 Twelve buildings to look forward to in 2020

We will increasingly build in and with the earth, rather than on it, and we will find ourselves somehow – I honestly do not yet know how – adapting the aesthetics developed in popular culture, from hip-hop to Instagram, into built form. After all, architecture always mimics what has happened in every other form of cultural expression, and especially music and visual arts, one or two decades later.

To telescope down further from these grand concerns, architecture will increasingly find itself working most effectively as critical endeavour when it engages communities, respecting and using their traditions and crafts, at a small level. As the making of anything bigger than a hut is mostly defined by those codes, economics, and the logic of computer program, it is only in small things, as Aldo Rossi predicted last century, that we might expect the possibility of an architecture of revelation, criticality, or even common sense and sensuality.

A great deal of this work will take place in Asia and in the continent of the future, Africa

Not only that, but a great deal of this work will take place not in the Western world, but in Asia and in the continent of the future, Africa. Already some of the best and most inventive work is taking place in villages around China and Vietnam, as well as in clinics and other community facilities in both East and West Africa.

Finally, I wonder whether this will be the decade in which the very notion of architecture as the production of buildings will dissolve, and whether the differences between the designs of landscapes, interiors, movies, objects and furnishings, and graphics will perhaps not disappear, but begin to sort themselves in new ways. Given the myths we have grown up with, might we choose our careers and our avocations through the use of the Sorting Hat rather than with the help of guidance counselors and aptitude tests?

We thought this sorting was going to happen many decades ago, when university departments reshaped themselves according to the scale or type of design at hand, but it turned out that the legacy of trades and professional systems were too strong for that kind of logic. In the era of the gig economy and learning by certificate units, the days of the monolithic discipline and profession finally seem numbered.

The question is whether we will also lose the knowledge and rituals inherent in those disciplines. After all, the design traditions have their own value and importance, and we should not repeat the High Modernist mistake of throwing out the historical baby with the fluidity of the modern bathwater.

Of course, none of this might happen. To come back to the beginning from this flight of fancy into the future: the problem with predictions is that they are fairy tales we tell about the future we either dream about or have nightmares of. Having said that, there are some who say that, in the face of our inability to effect necessary change, social justice, and a sustainable society through logic, in democratic debate, or by design, the best thing we can possibly do is tell good fairy tales. In mine, the wicked witch of the west is vanquished, and we come home from the Oz of smoke and mirrors to an earth that we re-cultivate and re-culture.

Photograph of LocHal library is by Stijn Bollaert.