Danish architecture studio BIG is designing a "prototype city of the future" with wooden buildings and autonomous vehicles for Japanese car company Toyota near Mount Fuji in Japan.

Named Woven City, the first phase of development on the site of a former car-factory will be home to 2,000 people who will test the vehicles, robotics and smart homes in a "real-world environment".

The design was revealed at the Consumer Electronics Show (CES) in Las Vegas with an animation created by London digital studio Squint/Opera.

"Building a complete city from the ground up, even on a small scale like this, is a unique opportunity to develop future technologies, including a digital operating system for the infrastructure," said Akio Toyoda, president of the Toyota Motor Corporation.

"With people, buildings and vehicles all connected and communicating with each other through data and sensors, we will be able to test connected AI technology, in both the virtual and physical realms, maximising its potential."

The 70-hectare development in the city of Susono will be designed by Danish architecture studio BIG – it will be the studio's first project in Japan and is set to start on site in 2021.

The Woven City will be built around a network of streets that will cater for transportation at three different speeds.

Main streets will be used by autonomous vehicles including the Toyota e-Palette, smaller streets will be for other modes of personal transport including bicycles, scooters and Toyota's i-Walk, and the third type of street will be fully pedestrianised.

"Today the typical is mess – with everything and nothing happening everywhere," said BIG founder Bjarke Ingels.

"With the Woven City we peel apart and then weave back together the three components of a typical road into a new urban fabric: a street optimised for automated vehicles, a promenade for micro-mobility, and a linear park for pedestrians."

Buildings throughout the development will be built from timber with solar panels placed on the roofs.

The blocks will be arranged in groups around central courtyards, which will be connected to each other by the streets and pedestrianised linear parks. 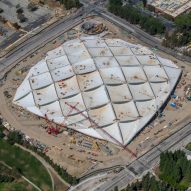 "In an age when technology – social media and online retail – is replacing and eliminating our traditional physical meeting places, we are increasingly more isolated than ever," he continued.

"The Woven City is designed to allow technology to strengthen the public realm as a meeting place and to use connectivity to power human connectivity."

The development will contain research and development spaces for Toyota to develop robotic construction, 3D printing and mobility designs.

Alongside Toyota's facilities there will be housing for employees, their families, scientists and retirees. The residential buildings will contain in-home robotics to "take care of basic needs and enhance daily life" and sensors connected to AI to check resident's health.

The community will be powered by a combination of solar energy, geothermal energy and hydrogen fuel-cell technology.

Ingels hopes that the development can be a prototype for how to redevelop existing cities.

"As a replicable framework, the Woven City can serve both as a prototype for future cities and as a retrofit to current cities," he said.

"By simply 'reprogramming' existing streets, we can begin to reset the balance between people, mobility, and nature in cities as diverse as Tokyo or New York, Copenhagen or Barcelona."

BIG is a Danish architecture studio that was founded by Ingels in 2005 and has offices in Copenhagen and New York. The studio is currently working with Heatherwick Studio to create a headquarters for Google in California and last year unveiled a design for floating villages that can withstand hurricanes.