The Operio collection is "inspired by cult cinema, decadent disco and menacing monsters," according to the label.

Named after the Latin word for "to conceal", the collection features 12 made-to-measure outfits influenced by 1970s disco culture as well as filmmaker Wes Anderson and horror-movie director John Carpenter.

"Despite its bold cheerful colours, the Operio collection disguises something disturbingly ominous, as seen in the animated video that supports the launch," the label said.

The collection was designed by Nange Magro, a London-based designer and stylist who, as well as running her own fashion line, has created latex costumes for artists including Janelle Monae, Katy Perry and Dua Lipa.

"Dead Lotus Couture's Nange Magro understands that everyone has a dark secret," the brand said. "She aims to express the wearer's dual identity with monster-like fur breaking through the latex second skin."

The hand-made outfits are made of natural latex, which is the raw material for rubber. It is derived from the sap of the hevea brasiliensis, commonly known as the rubber tree. 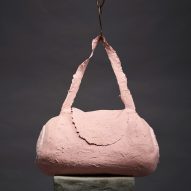 Molly Younger's washable luggage is made from latex

Latex is harvested by cutting incisions in the bark, from which the milky white liquid latex drips into containers in a process known as "tapping".

Magro, who is half Italian and half Japanese, first came across the material when studying an MA at London College of Fashion, from where she graduated in 2011.

"I immediately fell in love with it, due to the tactile feeling, the smell, the sensation of it, got deeply fascinated by the sense of power it so easily gives when wearing it," Magro told Dezeen.

"I found the material itself gives such an edgy connotation and character to any design, adding an extra dimension to it. With latex, boring is out of the question."

Magro uses latex sourced from renewable suppliers, and claims the material is both more sustainable and versatile than alternatives such as leather, PVC and synthetic latex.

"Latex is preferable to leather due to the fact that none of the additives are derived from animals," she said. "It has a much closer fit and much higher stretch than leather or PVC."

Magro believes the material should be seen as a premium natural material.

"As you might know latex's popularity was born in the fetish scene, but I believe it's time for it to get to the next level," she said.

"Just like silk, leather and every other premium material, I would like to see latex in every wardrobe."