The Seoul-based designer developed the Split series as an artistic expression of the changes that took place in Korean culture during the Joseon period.

"We had cherished our own distinctive and gorgeous Korean beauty until the Joseon dynasty," Shon explained, referring to the kingdom that ruled Korea from the 14th to 19th century.

"However, through the period of unstable Japanese colonial rule [between 1910 and 1945], somewhat radical western influences were prevalent and thus, there have been some occasions of a lack of balance in culture."

According to Shon, the isolationist policy adopted by the regent Heungseon Daewongun during the latter part of the 19th century prevented Korea from adopting aspects of western culture.

His furniture project is an attempt to express what he described as the current "misaligned coexistence" of Korean and western ideologies in his home nation.

"The reason to contrast and divide the two materials of wood and mirror stainless steel in this work is not to simply acquire aesthetic beauty but to fuse the distinctive features of each material," said Shon. 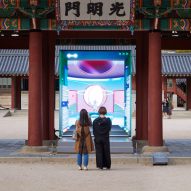 The designer explained that the pine wood was chosen to "represent the natural beauty of curves found in traditional Korean housing", while the metal structures "express the western beauty of being straightforward and manmade".

The irregularly shaped logs and geometric sawn blocks intersect with the steel structures, creating supports for the benches or storage space in the shelving units.

The mirrored surfaces reflect the natural wood, as well as the surroundings. As such, the materials work together to ensure the wood remains the main focal point.

Shon photographed the furniture at a palace called Unhyeongung, which is the former residence of Heungseon Daewongun. The images reinforce the narrative behind the project by highlighting the contrast between the traditional and modern components.

The installation shows a digitally rendered wooden door opening to reveal a variety of scenes from South Korea's past and present.