Studio Razavi has abandoned excessive decoration for simple plaster walls and arched niches inside this Lyon apartment, which is meant to channel a sense of calm.

Nestled amongst the winding, cobbled streets and Renaissance-era buildings of the historic Vieux Lyon neighbourhood, Apartment XVII has been designed by Studio Razavi to be an "introspective space".

Left untouched for 60 years, the apartment had fallen into a state of ruin. However it's new owner – a young scientist – was less interested in the studio carrying out an aesthetic overhaul, but instead wanted to feel a change in his "lifestyle and philosophy".

"The [client's] wish was to create a serene space, a place where one would not feel overwhelmed by decorative information and where as much of the original features could be celebrated," the studio told Dezeen.

Walls in the apartment have thus been covered in pale-grey plaster, complementing the light-hued wooden floors.

Furnishings are far and few between – a glass table with tomato-red legs, black dining chairs and a grey sofa are the only pieces to appear in the apartment's living room. Mute-tone ceramics have also been dotted sparingly throughout, along with a trio of portrait sketches.

Arched shapes are a visual motif in the home, appearing in the form of doorways, storage cupboards and recessed display niches.

A tall, arched panel has also been placed against a wall, creating a graphic backdrop to the home's study area, while screens with arched, mesh-covered cut-outs have been placed in front of the radiators.

"[Arches] were a way of opposing – hence celebrating and bringing forth – the strong rectilinear geometry of the existing space," explained the studio.

"The main space is almost square in proportions, therefore choosing curves was also a great play on perception and overall balance."

A majority of the vaulted openings have been inset with sea-green coloured MDF to match the cabinetry in the kitchen, which features a splashback with a stepped silhouette. 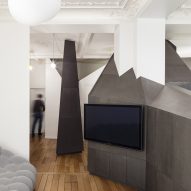 The project also saw the restoration and preservation of a handful of the apartment's original features, like the heavy oak-beam ceiling and a couple of ornate stone fireplaces.

Studio Razavi was founded by architect Alireza Razavi and has offices in London, Paris and New York.

Back in 2016 the studio overhauled an apartment in Paris, creating a sculptural black storage unit at the centre of its floor plan that dramatically contrasted the home's ornate, Hausmann-era details.

Other projects by the studio include a photographer's house in Brittany that's punctuated with huge square windows and a tapas bar in Manhattan that takes cues from Barcelona's marketplaces.