French office Studio Razavi has inserted a multifaceted black block into the centre of an apartment in Paris, creating a new layout while also offering a contrast to Haussmann-era details (+ slideshow).

Studio Razavi renovated Apartment XIV for a young couple who collect contemporary artwork, as well as their dog. The aim was to create a more open configuration, while also preserving the ornate 19th-century detailing.

The architects removed some walls and slotted a sculptural multi-functional furniture block into the gaps. Made out of black wood-fibre panels, it has a staggered profile that allows views between different areas and frames selected ceiling mouldings.

"The existing context is that of a 150-year-old 'Haussmannian' apartment with a rigid layout, which we intended to disrupt so that ultimately its inner qualities are revealed," architect Guillen Berniolles told Dezeen. 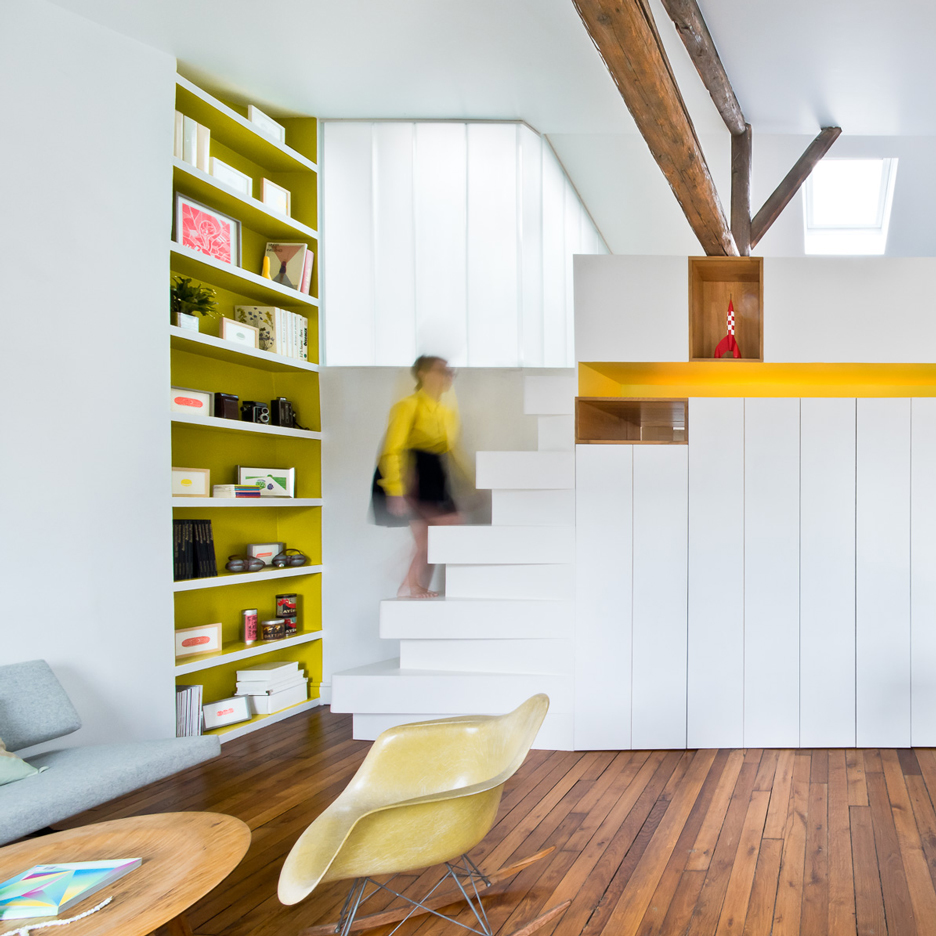 "Our focus was to remove all existing partitions and to create new contemporary spaces," said Berniolles. "Materials and shapes were chosen to create a contrast between existing and new and dark and light."

The structure sits in the centre of the space. Each of its faces hosts a different function for the kitchen, living and dining area arranged around it.

"Programmatic clusters respond to specific client needs, create a landscape inside the apartment and modify the perception of this very classical Parisian layout," said Berniolles.

At its tallest peak, the structure features storage cabinets that point towards the kitchen. This rooms features cabinets in the same material, as well as a splash-back comprising a jagged patchwork of marble.

A study desk is fitted in the lowest end of the black volume, while a television is mounted on the side that faces the living area.

A matching triangular column sits alongside it in the entrance space, which accommodates a dog bed and more storage cabinets.

The architects also added a white block with a V-shaped profile to accommodate a new bathroom, with a space above that can be accessed by a ladder.

It angular form is mirrored by a row of cupboards that creates storage space for the master bedroom.

Minimal materials and a stripped-back colour palette feature throughout the apartment, but timber flooring offers some relief from the otherwise monochrome colour scheme.

Apartment XIV dates back to Baron Haussmann's reorganisation of Paris during the second half of the 19th century, when all structures were designed under height restrictions and constructed from the same cream-coloured stone.

Other recently-updated buildings from this era include a flat with a multifaceted wooden volume that house two shower rooms and an apartment with multicoloured flooring and space-saving stairs.

Studio Razavi was founded by architect Alireza Razavi, and has studios in both Paris and New York. Previous projects by the firm include a monolithic house for a photographer in Brittany.

Photography is by Olivier Martin Gambier.