French designer Camille Walala has created a life-sized toy house inside a series of shipping containers to mark the launch of Lego Dots, the toy company's latest product.

The House of Dots has all the hallmarks of a regular home – a living room, kitchen, bedroom and bathroom – spread out over a two-story complex of eight containers in London's Coal Drops Yard.

But instead of just paint, the designer's colourful, richly-patterned style is realised primarily through more than two million pieces of a new product called Lego Dots.

Unlike the brand's classic bricks, this new range features flat, 2D tiles in different colours and geometric shapes, which can be combined into an array of patterns and used to adorn surfaces.

For the installation, these were placed individually and by hand onto large, Lego base plates, which in turn were mounted to the surface of the different plywood furniture pieces and home decor elements.

"The tiles are the literal building blocks of the design," Walala told Dezeen.

"I worked with Dots of different scales, starting with the smallest, one-centimetre tile and using it to create patterns around the house – on cushions, walls and even the window on the facade."

This posed a unique design challenge because, unlike most other materials, the pieces couldn't simply be cut to any desired size or shape.

"I had to design to Lego's scale, thinking in terms of how many tiles we’d need to make a particular pattern," said Walala.

"There was a lot of maths involved. To create a table, for example, we had to ensure its length corresponded precisely to a set number of pieces."

Over the course of five different rooms, the public art installation is designed to take visitors on a "journey through colour".

"I gave each room a unique palette so the spaces would have a completely different atmosphere," the designer explained.

"The bathroom is monochrome; the bedroom is a bit more Memphis, with pastels; the kitchen is quite bold and primary; and the lounge features almost the full palette of Dot colours."

Square Lego units also form the tiles in the kitchen – some of which have been given a colourful makeover by children from a local school, while a series of all-white tiles play with textures rather than shades.

Highlights in the bathroom include an Instagram-friendly ball-pit bathtub, complete with water splashes rendered in blue Lego tiles, and a hidden door that leads into a hall of mirrors-style, blacklight Disco Room. 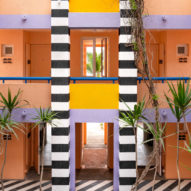 Finally, the exit takes the form of an eight-foot slide because, as Walala explained: "Why would you not want to add a slide?"

"From the beginning, our aim was to create the perfect kids' dream house," she continued. "And everyone in the studio agreed that a slide was a massive part of that."

From now until the 2 February, visitors to the installation can experiment with creating their own designs using the Dots range.

Here, the focus isn't so much on architectural thinking and building 3D structures, as with the traditional Lego pieces, but about experimenting with more intricate details.

"Like most kids, I grew up loving Lego," said Walala. "The Dots give kids new opportunities to express themselves through colour and pattern – which is obviously something very important to me."

Unlike putting pen to paper, which create the pressure to execute a full-formed idea, using the tiles as a canvas is meant to allow children to design and redesign endlessly, following their inspiration rather than just step-by-step instructions.

Lego has also recently launched bricks embossed with the letters of the Braille alphabet to help blind and partially-sighted children to learn through play.

Elsewhere, Walala's distinctive, graphic style has graced everything from a collection of street furniture, to a hotel in Mauritius and an entire Brooklyn housefront.

All photography courtesy of the Lego Group unless otherwise stated.