Courtyards and double-height spaces create a bright and airy atmosphere inside this black house in Mexico City, which was designed by architecture studio PPAA.

Lluvia house is located in Jardines del Pedregal, an upscale residential district in the southern part of the city. The modernist architect Luis Barragán created the area's master plan in the 1940s.

Rising two storeys, the dwelling sits on a long, rectangular site that totals 1,076 square metres. Local firm PPAA, or Pérez Palacios Arquitectos Asociados, set out to create a family home that embraced the natural greenery found on the property.

"Our main intention was to merge sections of the main, forest-like garden with the interior of the house and let in natural light," the studio said.

The firm created a series of rectilinear volumes, with a number of voids integrated into the plan. The openings give the 600-square-metre residence a bright and airy feel. 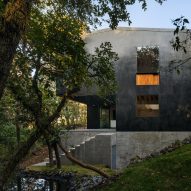 "The house is conceived as a solid volume that incorporates subtractions along the main axis," the studio said. "These are formed as small courtyards and double-height spaces, depending on the programme."

Exterior walls are made of concrete block covered with a black-hued coating called Corev. Teak wood was used for accents such as window shutters.

The interior features light-toned finishes that contrast with the black exterior. Rooms and corridors have white walls and pale grey flooring. Windows are trimmed with white oak – the same material used for wall panels and flooring in certain areas.

Public and private zones are distributed across the home's two levels. On the ground floor, the team incorporated a garage, laundry facilities, a kitchen, a dining space, a living room and a family room. The public area flows onto a terrace with cooking equipment and a built-in fireplace.

The upper storey encompasses a master suite, three bedrooms and a lounge area. The two levels are connected by a staircase made of masonry and finished with sandblasted marble.

Rooms are fitted with contemporary decor, including a grey sofa and glossy white coffee table. Multiple skylights bring daylight deep into the interior.

PPAA has designed a number of residential projects in Mexico, including a black home in a hilly, forested area and a stone-clad retreat for two brothers who enjoy rock climbing.