A derelict house in London that had tunnels dug under it by the infamous Mole Man has been restored and adapted by architect David Adjaye for the artist Sue Webster.

Adjaye's studio Adjaye Associates has transformed the abandoned building, which sits atop a labyrinth of filled-in tunnels, into a live-work space for Webster.

The artist, who previously commissioned Adjaye Associates to build her a home called Dirty House, was attracted by the abandoned house's bizarre past.

Lyttle was dubbed the Mole Man by the press when the secret network of tunnels and caves were discovered. He was later evicted and the tunnels were blocked up with concrete.

In homage to the Mole Man's legacy, Adjaye Associates has built multiple entrances and exits to Mole House.

The studio also excavated it below street level and gave it a basement extension – with planning permission this time.

The three-storey house sits on a triangular plot, with two doors accessible from the road and driveway leading to the main house or the studio on the lower ground floor.

Steps also lead from the main house to the front garden, providing access to the studio and sunken back garden.

During the renovation, the architecture studio carefully dug out 2,000 tonnes of the concrete used to fill up holes around the property, revealing years of what the studio called "fossilised domestic history".

Over 15,000 reclaimed London bricks were used to patch up the damaged facade.

Distressed, patchy render is left in place, further underlining Mole House's weird history, and a concrete band around the exterior adds to its bunker-style appearance. 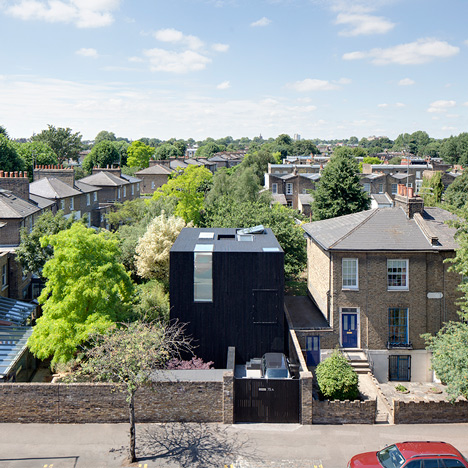 Bay windows framed with patinated copper project from the lower levels and a new slate roof sits on top.

Interior walls and floors that were eroded by decay or damaged in a fire were removed, along with the party wall that had previously divided the property into two houses.

Open-plan living spaces are framed by exposed concrete walls and built-in timber elements such as cupboards and staircases.

Neighbours had been complaining about Lyttle's burrowing since he moved into the property the 1960s, but he insisted he was only digging a large wine cellar.

In 2006, after a stretch of pavement collapsed due to undermining, the council used an ultrasound scanner to reveal the extent of the Hackney Mole Man's hobby.

They discovered tunnels that were eight metres deep and 20 metres long, radiating in all directions. A reported 33 tonnes of gravel, earth, and junk including cars and a boat had to be removed by the council.

Adjaye Associates was founded in 2000 by architect David Adjaye.

Adjaye also designed a home called Sunken House for the photographer Ed Reeve on a nearby street. In 2015, Reeve applied for planning permission to dig a private railway station under his property so he could connect to the new Crossrail underground trains, as a prank.