A host of large-scale installations have been built amidst the canyons of the Al Ula desert in Saudi Arabia that reflect the landscape and its heritage for the returning Desert X exhibition.

Previously located in the Californian desert, in the area known for hosting the annual Coachella music festival, Desert X Al Ula is the first site-responsive exhibition of its kind in Saudi Arabia.

Each of the works, which range from artificial puddles that double as trampolines to a three-seater swing, are intended to encourage dialogue about the desert and reflect on the area's history.

The installation by French-Tunisian artist eL Seed, for instance, was informed by the ancient trade routes that formerly ran through the Al Ula desert. The work itself sits on site of what once was an oasis.

Titled Mirage, the sculpture resembles a pile of muddled letters taken from the Arabic script, which viewers can enter and walk underneath.

Instead of using striking colours as featured in the artist's other works, eL Seed opted for muted beige tones that blended in with the surrounding environment to make the sculpture almost "disappear", giving the impression of a mirage.

Rashed Al Shashai also reflects on the desert's trading history with a pyramidal structure made from plastic pallets typically used for the transportation of goods.

Al Shashai's A Concise Passage installation aims to represent Al Ula as a centre for the exchange of ideas rather than goods, and a generator of meaning and understanding rather than commerce.

According to Desert X artistic director Neville Wakefield, who co-curated the exhibition with Raneem Farsi and Aya Alireza, site-specific works such as these are informed by land art from the late 1960s and early 70s.

At this time, artists "consciously gravitated towards the remote as a means of breaking down the walls – physical, experiential and economic – of the institutions to which they felt bound," Wakefield said.

"Since then, globalisation has left us with a radically altered perception of the world," he continued. "The universe may have contracted but cultural walls remain."

By bringing a site-specific contemporary art exhibition to the Saudi desert, the curators hope to create connections between different individuals by sparking conversations about culture.

Designed to be both futuristic and as a hint to ancient totems, Gisela Colon's monolithic work The Future is Now brings together old and new, while Rayyane Tabet's Steel Rings installation references the Trans-Arabian Pipe Line.

Around 6000 tin date containers, which were once integral to Al Ula's agricultural wealth, make up Zahrah AlGhamdi's Glimpses of the Past work, while Muhannad Shono's The Lost Path is made from thousands of plastic pipes that come together to form a snaking, almost hair-like, sculpture. 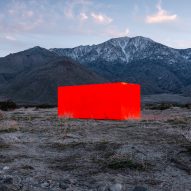 Sherin Guirguis wedged a sculpture of a Bedouin anklet in between a rock crevice for her Kholkhal Aliaa work, while Mohammed Ahmed Ibrahim's Falling Stones Garden sees rock-like forms painted in vibrant colours to express the fragility of the desert ecosystem.

Desert X Al Ula is organised by the Royal Commission of Al Ula (RCU) in collaboration with Desert X, which took place in 2017 and 2019 and will return for its third edition in the California desert on 6 February 2021.

Last year's Desert X exhibition saw a total of 18 artists and groups create installations to the biennial, which were spread across California's Coachella Valley.