Designer Daniel Svahn's chairs for a town hall in Stockholm are made from recycled unwanted tabletops that were destined for the dump.

The laminated MDF for the furniture collection, called New Goodies but Oldies, came from a conference room at Nacka town hall that was undergoing refurbishment.

Svahn approached the municipality of Nacka about a potential collaboration because it had previously demonstrated a progressive attitude towards sustainable development.

As part of its renovation of the city hall's conference facility, the tabletops made from laminated MDF were due to be scrapped.

Fourteen old tabletops were being replaced with new ones and were due to be disposed of, until Svahn intervened.

Svahn proposed that this material could instead be used to create three new seating products for use in the building's public spaces.

New Goodies but Oldies designs are informed by common types of activities and interactions he observed taking place in the city hall.

The first product is a simple seat with an elongated side section that offers privacy for users needing some quiet time to work or relax.

The other seats are designed to be shared. One is a playful design with a slightly curved underside that rocks gently when two people sit on either end.

The other object allows two colleagues to sit side by side and work together using a shared tabletop.

Svahn's designs aim to maximise usage of the available material by making as few alterations as possible. This involved working with the predetermined shapes of the tabletops, cutting and joining them to form three-dimensional objects.

The New Goodies but Oldies is a demonstration that materials from products that are no longer wanted can be salvaged and repurposed.

"It's basically cheaper and easier to bin and buy new things than to tend to the old," he told Dezeen. "Therefore a lot of good material is being binned and ultimately incinerated."

"[This is] a poor, flawed system and approach in this day and age. Particularly within the governmental and municipal arena, the ones who should lead by example."

The project is part of Svahn's studies at Konstfack University of Arts, Crafts and Design in Stockholm. The designer hopes it highlights how much material is being wasted, particularly in the public sector.

"The public sector is a huge material waste contributor because there are not enough rules, regulations or guidelines when it comes to tending to furniture that is considered to be old, obsolete or broken," the designer told Dezeen.

"Rules and laws need to be changed so that more sustainable and circular systems can be tried and established to a greater extent."

The designer explained that cutting the material efficiently was vital to keeping the time and costs involved low. He added that the shapes maintain a semblance of the original tables and support the project's central story about repurposing unwanted products.

The New Goodies but Oldies will be presented during the upcoming Stockholm Furniture Fair, with the outcomes displayed alongside diagrams depicting how the tabletops were sliced up to create the new components. 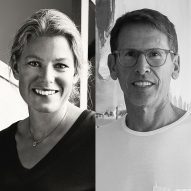 Svahn hopes that one of the project's outcomes will be an enhanced awareness of the issues surrounding reuse and the circular economy, which he feels could prompt a change in attitudes among consumers and policy makers.

"We really need to teach and emphasise the difference of cost versus value," he concluded.

"Even if the costs of buying new or upcycling and reusing are the same in the end, the value of doing the latter is greater because it saves material and with that emissions and other extraction and production footprints."

Other recent recycled furniture projects include a bench made of old bicycles and coffee tables made from reclaimed windows.