A community of nuns have donated their convent in New Orleans to create the Mirabeau Water Garden wetlands and improve the city's system for flood prevention.

The transformation of the 25-acre Catholic convent is being developed by Waggonner & Ball and Carbo Landscape Architects to reduce pressure on the low-lying coastal city's existing drainage system, as climate change makes flooding an increasing threat.

Once complete, the Mirabeau Water Garden will become "one of largest urban wetlands" in the USA, according to Waggonner & Ball, with the capacity to naturally absorb and store approximately 6.5 million gallons of floodwater.

The convent, which belongs to the Congregation of St Joseph, remains in a state of disrepair following destruction during Hurricane Katrina in 2005.

Rather than opting to rebuild the convent or sell the site to developers, its community of nuns decided to donate the land to create wetlands as a changing climate and rising seas is making the threat of flooding more prevalent in the city, which is largely positioned below sea level.

"The land was donated to the City of New Orleans by the Congregation of St Joseph on the condition that it be used to enhance and protect the neighbourhood," said Waggonner & Ball.

"This vision was embraced by the Sisters of St Joseph as one that, in their own words, 'would manifest the holiness and the beauty of this land...and evoke a huge systemic shift in the way humans relate with water and land.'"

This will be teamed with a system of bioswales – a simple landscaping feature used to slow and collect stormwater – positioned around the perimeter of the site.

While improving the safety of local people, the Mirabeau Water Garden development is also hoped to increase property values in New Orleans and offer the community recreational space and educational facilities.

The studio hopes it will set a precedent for other open spaces and institutional sites throughout the city and region. 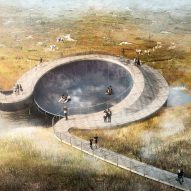 "The community will be able to see and learn, through interactive features, how the site functions and is part of an integrated water management system that benefits the surrounding area by taking flood waters away from streets and homes and storing them in the landscape."

The projects include a Gehry-designed staggered duplex, a "floating house" by American studio Morphosis, an elevated property by Los Angeles' Atelier Hitoshi Abe and a residence with a faceted roof by Pugh + Scarpa.

The Mirabeau Water Garden is among a number of flood-prevention projects and proposals developed in the wake of the climate crises. Other examples include Zaha Hadid Architects' sculptural flood protection barrier in Hamburg, CF Møller's proposal for hybrid flood defences that will form a nature park in Denmark and McGregor Coxall's design of a wetland sanctuary in northern China.

Visuals are courtesy of Waggonner & Ball.