The local practice designed the renovation and extension for White Rabbit House, which is set in a terrace of neo-Georgian houses built in Canonbury, Islington in the 1970s.

Gundry & Ducker could not add an extra level because of local planning restrictions, so instead they rearranged the two-storey building to make three floors.

The studio added an extension to the rear that is clad in marble and terrazzo, in a design that is meant to allude to Georgian fireplace decoration. Pale, strawberry-pink tiles line the top of the rear facade.

Gundry & Ducker then gutted the interior to create what they describe as a "modern interpretation of a Georgian house".

The centrepiece is a staircase that curves around into a cantilever. An overhanging lip from the top stair has a circular cut out for the end of the bannister to run through.

"The design is centred around a cantilevered pill-shaped staircase that sits in a triple-height space with the upper rooms accessed directly off the stair," Gundry & Ducker said.

"The cantilevered staircase was built entirely on-site and, although contemporary, is built in the same way a Victorian or Georgian staircase would be built."

The stair is painted a pale green with slim racing-green railings and a polished wood bannister. The steps are made from a custom terrazzo, which has large chips, to match other details in the house.

Marble and terrazzo slabs line the floor of the entrance hall in a chequerboard pattern with walls painted a pistachio-green shade.

The colour scheme continues into the kitchen, which has built-in wall cabinets and kitchen island painted in a more vibrant green – similar to the hue of absinthe. 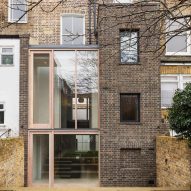 A skylight brings natural light in from above and metal-framed doors open on to a back patio.

Arches are another repeated motif found throughout the property. Arched windows and doorways line up from the front door through an arched hallway, to the window from the kitchen to the garden.

Upstairs a new bathroom is painted pink, with an arched doorway and a rounded half wall separating the shower.

White Rabbit House has been shortlisted for the 2020 Don't Move, Improve! award for best home improvements.

Founded in 2007 by Tyeth Gundry and Christian Ducker, Gundry & Ducker has also designed a colourful bubble tea cafe in Soho and a by-the-slice pizza parlour in Dalston.