Seoul design studio Useful Workshop has created a furniture series made from sheets of aluminium that are bent to form curves using industrial machinery.

Useful Workshop is headed by designer Sukjin Moon, who worked with a factory in Incheon, South Korea, to realise the Curvature Series using its metal-pressing machines.

The furniture was developed from a prototyping process in which the studio modelled forms by folding paper. Moon realised the shapes created using this method could be scaled up and replicated in aluminium sheets.

"The curvature series is a result of the paper folding practice," Moon explained. "We discovered a certain aesthetic in a raw stage of the industrial design process and tried to bring it out as it is."

"After the decision to use the metal-folding process, each curvature, radius and surface was practiced continuously considering the manufacturer's tooling environment and available tooling conditions."

The furniture is made by bending flat pieces of aluminium using a press brake machine. These machines typically use a matching punch and die to press sheet metal into the desired shape.

Moon spoke with the factory's technicians to understand the tolerances of the metal and the machines, before developing furniture with simple curved profiles that can be created by bending the material in even increments.

"Each design has a different curvature and different angles but they all have reasons why," the designer told Dezeen, "either because of the limitations of the manufacturing or the machine's size. This means I can't make very complicated curves." 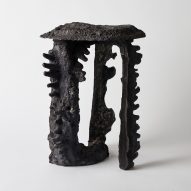 The first piece to be developed was the Curvature Shelf. This unit features J-shaped folded components that form supports for shelves made from solid maple wood.

The hollow form of the shelf supports means they can be used to hide cabling or other items. The modular system can also be easily expanded by adding more components.

The same bending technique was used to create a long bench with a slightly raised section at the rear of the seat. Three pieces of solid wood are inserted between the top and bottom surfaces to maintain the bench's structure when sat upon.

The Curvature Tea Table features a flat upper surface that curves smoothly to form supports at either end. Only upon closer inspection do the ridges of the pressed surfaces become evident.

The final piece in the Curvature Series is the chair, which Moon claimed was also the most complicated. The form went through several iterations to identify the optimal proportions and curvature for the seat.

The chair features simple aluminium legs that support the seat. Moon added that the choice of aluminium was made for environmental reasons, as the material is 100 per cent recyclable.

The furniture was exhibited at the Stockholm Furniture & Light Fair as part of the Greenhouse section for up-and-coming designers.

Sukjin Moon graduated from the MA Design Products programme at the Royal College of Art in London in 2012. His practice works across multiple disciplines, with a consistent focus on creative research and practical prototyping.

Photography is by Sangpil Lee.