The project, called Fictive Erosion, was exhibited as part of the Stockholm Furniture & Light Fair and imagines a future where machine-driven manufacturing is outlawed for the sake of the environment.

Instead of relying on automated processes, each table, stool and lamp is individually crafted through the method of sand casting.

"I use sand to form a mould and carve out the shape of the piece by exposing it to different forces," Melchior told Dezeen.

"I use air and water guns as well as the pressure of my own fingers to manipulate the sand until I get a form that I think I like. Then I pour in plaster and dig it up once it's dry to see what the shape is. Because it's a negative I never quite know what the final results is going to be."

The monolithic lights are cast in two halves, while for the tables and stools each leg is individually made and exposed to a different element.

Rather than using glue, Melchior then moulds the separate elements together to create one continuous piece.

Sand casting is traditionally used to create metal objects, but in this case its unique texture imprints itself onto the plaster to create a material that looks almost like stone. 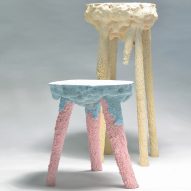 Gavin Keightley's Terraform furniture is cast in moulds made from food

"You can repeat straight, simple lines endlessly but here everything is unique," said the designer.

"We're so used to making everything exactly the way we want it. And of course I want to have some control but I also think it's important to have an element of chance. It's like a dialogue between me and the sand."

The sand is cheap and, unlike a plastic mould, continually reusable to create different effects. This gives Melchior ample space for experimentation without creating excessive waste.

"I'm interested in developing new ways to produce form, and looking to nature to see how she does it," she explained.

"I think we as designers need to reconsider how perfect things can be and what perfection is. That's what I like about nature – there's no exact repetition or replication."

Elsewhere at the Stockholm Furniture & Light Fair, which took place between 4-8 February, designers unveiled an outdoor sofa that mimics crowd control barriers, a collection of chairs made from disused tables and a series of household objects cast in glass instead of plastic.