Blocks of limestone are transformed into furniture in this collection by students from the Estonian Academy of Arts.

Presented at the Stockholm Furniture & Light Fair, Dig Where You Stand is a series of six crafted objects, including nonidentical twin stools, a rocky table and a rotating floor lamp.

Each design explores the possibility of using limestone as a solid material, rather than just as a surface, as is more common today.

The idea was to rediscover the potential of this material, which is at the centre of a major industry in Estonia.

The limestone furniture designs were developed and produced as part of a course led by designer Nick Ross.

"We asked students both to acknowledge the legacy of one of the country's largest dolomite quarries," said Ross, "while also contesting its historic contribution to the presentday limestone industry that uses the stone mainly as a finishing material – for countertops, flooring, cladding, and facades."

"The premise of the course was that, by researching and learning about our own history, we would be able to regain some control over and understanding of our lives," he added.

The title, Dig Where You Stand, is a reference to a book by Swedish author Sven Lindqvist, which suggests ways of studying personal histories. 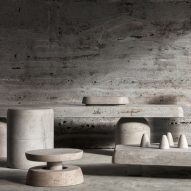 Henri Kaarel Luht created a large floor lamp that spins at the lightest touch, designed to question the weightiness of the material.

When The Shovel Hits the Stone is a set of two contrasting stools, one polished and the other more rugged, designed by Oliver Kanniste.

The series is completed by a pair of ambiguous dinner-table objects by Siim Simmermann, which take cues the geological origins of limestone formations.

The project was presented in the Greenhouse section of the Stockholm Furniture & Light Fair, which took place from 4 to 8 February as part of Stockholm Design Week.

Other products on show at the fair included a chair by Ronan and Erwan Bouroullec framed by a single piece of rope and a light designed by Ilse Crawford in the spirit of a classic library lamp.

Photography is by Laura Ruuder.