Italian fashion house Giorgio Armani has staged its women's Autumn/Winter 2020 show in Milan without an audience for public health reasons as the coronavirus outbreak hit Italy.

Giorgio Armani released a statement early on Sunday 23 February telling guests not to attend the show and instead announcing that it would be live streamed on its website and Instagram and Facebook pages.

The statement said the decision was made in order to "support national efforts in safeguarding public health", and to protect the invited guests by stopping them attending "crowded spaces".

The decision was made amid rising concern over the coronavirus outbreak in Milan. The Salone del Mobile furniture fair, which is due to be held in April, is "consulting with stakeholders and the government" over its response to the outbreak.

The Giorgio Armani show was held inside an empty showroom on 23 February at 4:00pm CET, at the close of this year's Milan Fashion Week, which began on 18 February.

The show saw models walk around a raised rectangular runway surrounding a central display that used blue, moving lights to emulate ripples in a pool of water, populated with structures made to look like plants and petal-like forms suspended from the ceiling.

Giorgio Armani reinterpreted the grand costumes of literary heroes with a feminine focus for the show, incorporating epaulettes, small jackets with high buttoning and knickerbockers tucked into boots.

While the colour black permeated the collection, it was kept vibrant with additional shades of pink, lime green and blue, and beaded embellishments or feathers.

"The dialogue between the men's and women's wardrobe takes place in an atmosphere drenches with subdued romanticism," said Giorgio Armani.

At the end of the show, 12 Chinese models emerged onto the catwalk wearing archival pieces from Armani's couture Spring Privé collections from 2009 and 2019, which each took design cues from Chinese culture. 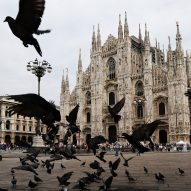 This was intended as "a message of love" for the country where the coronavirus outbreak began and the majority of infected people and deaths have been reported.

Giorgio Armani followed the models to close the event, gesturing thank you and waving to an audience that was not present.

Giorgio Armani was the only Italian fashion house to cancel its planned event amid the coronavirus outbreak. The National Chamber for Italian Fashion said in a statement that the rest of Milan's runway shows went ahead as planned on Sunday.

The last-minute move was made amid news that the virus had spread within Italy to infect more than 200 people. There have been seven deaths in the northern regions of Lombardy – of which Milan is the capital – and Veneto.

Milan's mayor, Giuseppe Sala, has said schools will be closed from today onwards while the outbreak continues, as well as universities in both Lombardy and Veneto until early March.

In total, more than 79,000 people have been reported as infected in 36 countries by the current coronavirus outbreak. The global death toll now stands at over 2,600.