Hector Esrawe's design studio has completed its first residence – a red-brick house in Mexico City that encloses a lush courtyard at its centre.

Esrawe Studio designed Casa Sierra Fría for a family of four who wanted a house with plenty of privacy.

It comprises two parallel volumes that are joined by a hallway to make a U-shape around the patio. The courtyard has a sunken, paved stone floor flanked by beds of greenery.

Slim, red bricks cover the outer walls and floors of the house to form continuity. There are also almost no windows on the exterior to add to the obtuse look.

"The main intention is expressed by a brick of long proportions, we aim to have a monolithic and introspective expression of the house, which contains the garden as the core that connects the social and private areas," Esrawe told Dezeen.

Glazed walls wrap the courtyard on the ground floor to offer views to the greenery and bring in daylight. These windows are only revealed as one enters the residence.

"The multiple volumes shaping it become the skin containing and framing the privacy," said the studio.

"It is not until you enter the house that a continuously-flowing space is revealed, surrounding the garden, as the heart of the design, the element bringing it all together," it added.

The atelier, which is considered one of Mexico's best-known design studios, originally focused on furniture but has since expanded to include interior design and architecture.

"In our studio, 30 per cent of the team is conformed by architects" said Esrawe. "It was a natural path for us."

A large wooden door punctures the brick walls and swivels open to provide access inside.

Esrawe Studio chose a pale material palette for the interiors to contrast with the exterior. Stone and wood in matching hues cover the floors, while walls are rendered in light tones.

Stone steps inside lead from the entrance into a sunken living room, where Esrawe has built a low-lying wooden shelf into the wall.

This is among a series of built-in furniture that the studio created for the house. 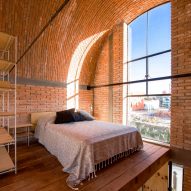 Esrawe Studio designs furniture for social housing all across Mexico

The kitchen and dining room are located on the other side of the home – accessed by the slender hallway. Sliding glass doors open the dining room to a covered area for eating outside.

A staircase in the hallway leads up to the first floor of the house.

The stair has a few stone treads at the base and then wooden treads that are cantilevered from the wall, providing a hint to the materiality across the residence.

A bedroom suite is located in the northwestern volume comprising a living area, study and a bathroom. The latter is covered in marbled grey stone and has access to an outdoor patio.

Two more bedrooms, a bathroom, lounge and study are housed across the corridor. Another set of wooden stairs leads from here up to the third studio and rooftop.

Esrawe Studio's recent projects include furniture for an experimental housing project in Hidalgo, Mexico. The designs will later be used to furnish social housing all over the country.