Leading designers have supported the decision to move Salone del Mobile from April to June due to the coronavirus outbreak, although some say the event should be cancelled for environmental reasons and others feel the Milan experience needs an overhaul.

Ross Lovegrove, Lara Bohinc, Luca Nichetto and Note Design Studio all voiced their support for the postponement of the world's biggest furniture fair to 16 to 21 June, as Italy battles to prevent further spread of the virus.

"I think it is the right thing to do, to show that the country is still alive and wants to move on," said Nichetto, an Italian designer based in Sweden.

"It was a very complicated decision to take for sure, but I have the feeling that to postpone and not cancel the Salone is more important as a message for the city of Milan than for the exhibitors."

Lovegrove added: "The Salone remember is primarily about global trade and distribution of new design, so it's better to postpone and guarantee its cultural and commercial success later."

Other designers and studios, including Tom Dixon and Lee Broom, have said they are optimistic about their ability to reschedule their exhibitions, due to take place in the city as part of the unofficial programme of events known as the fuorisalone.

"We are already planning and plotting to get on the road physically and digitally right now to take our newness straight to customers in April and May, and end up in Milan in June with an even bolder show in the summer sunshine," said London-based Dixon.

"Logistically we now have a lot of hoops to jump through," added British designer Broom. "This is nothing that cannot be managed and, on the positive, we have a little more preparation time, which has never happened before."

"None of this is really a big problem"

Despite some initially baulking at the cost and logistics, most Milanese curators have announced plans to move their events to match the dates of the Salone fair. Design districts including Brera Design Week and 5Vie will move, as will the Alcova and Spazio Rossana Orlandi exhibitions.

Design brands Mutina, Moroso, Magis, Glas Italia have all confirmed they will exhibit in Milan in June, as have regular exhibitions Norwegian Presence and Design Variations.

However, some designers have hinted that their participation will likely be scaled down for June. 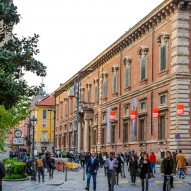 "We are going to postpone some new product launches but maybe rethink the installations in the city we were working on," said Cristiano Pigazzini of Stockholm-based Note Design Studio.

"None of this is really a big problem," he said. "It might be positive; we have more time to work and finalise the projects."

Nichetto also revealed some disruption. "The situation is creating big problems for us," he told Dezeen. "Some of our partners have decided that the investment will not pay back, so they have cancelled."

"I think there will be less visitors for sure," he added. "I don't want to say that the event is compromised, but for sure it will be different."

According to Lovegrove, the decision to postpone Salone del Mobile has revealed how important the Asian market has become to the design industry in Europe and beyond.

"The wider implication is the relationship with Asia, because in recent years the numbers of Chinese in particular visiting the fair have really grown and there is a firm and visible interdependence," he said.

Many Chinese designers, who would have been forced to pull out of exhibiting in Milan due to restrictions on travel from China to Italy, may now be able to attend in June.

"I will go to the Salone del Mobile at the rescheduled date and have changed my booking accordingly," said designer Chen Min. "I have to be fully supportive of my clients and some of my colleagues need to experience the Salone other than by always watching it online."

"I had cancelled my participation with the organiser before the announcement of the postponement," said designer Shaw Liu. "Now I have to contact them and see if I can claim my space again."

Other Chinese designers said it would be impossible to attend in June, even if they are able to travel to Italy, as the new dates are too close to major fairs in China that have already been rescheduled due to the coronavirus outbreak.

"We won’t be able to consider exhibiting at the new date," said designer Mario Tsai. "We will finish Design Shanghai on 29 May, and Shenzhen Furniture Fair is at the beginning of June. It would be too much of a hurry for us."

Other designers questioned whether travel restrictions will be lifted in time.

"We will not make a decision now about the postponed exhibition because at this point no one can predict what the situation will be at that time," said Hongchao Wang of Benwu Studio.

"Better if they had cancelled"

As there is no guarantee that the coronavirus epidemic will be under control by June, some designers have called for the event to be cancelled rather than postponed.

"I think it would have been better if they had cancelled the whole event," said Dutch designer Richard Hutten. "That would be good for the planet; half a million people not flying to Milan."

"Anyway it will be much less busy in June compared to April since there are a lot of other design weeks and other design events around the globe in that period," he added.

Scottish designer Nick Ross is also in favour of cancelling this year's event for environmental reasons. "I think it could be a good thing not having Salone at all this year," he said.

"A bit of breathing space for reflection could be a good thing. We already need to slow things down in the industry and start producing way less, so this might be a good excuse to start that."

"Postponing it only two months is a big risk"

Not all designers take such an extreme view. Benjamin Hubert, founder of London studio Layer, believes Salone is crucial for the design industry and that a later date should have been chosen, to avoid the risk of the new dates being affected if the coronavirus outbreak is not contained by then.

"I think it is wise to postpone, but I think postponing it only two months is a big risk, as the situation is extremely fluid and has the potential to be disruptive far beyond June," said Hubert.

"The real loss is the sense of community and networking that Salone offers, which is critical for the design industry," he added. "This loss would be particularly felt if Salone is postponed again or cancelled."

The coronavirus outbreak, which was first reported in Wuhan, China, in late 2019, has infected more than 80,000 people in 50 countries. Over 2,800 people have died from the virus so far.

Many countries have put international travel restrictions in place, and other events have been postponed, including Design Shanghai and Festival of Design in China, and the Light + Building fair in Frankfurt.

Both designers and brands are broadly concerned about the impact that coronavirus, and the measures being taken to prevent its spread, could have on their business.

"I worry about the consequences of a widespread sense of fear and uncertainty on sales for design brands," said British designer Lara Bohinc.

However, some designers are suggesting that the virus outbreak offers a chance to reflect on whether the entire Milan experience could be rethought. 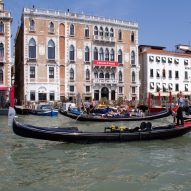 Venice Architecture Biennale to go ahead despite coronavirus outbreak

"Maybe we don't need to be so addicted to going every year," suggested British designer Paul Cocksedge. "We're living in a time when we need to think carefully about how much we're travelling."

"There's a huge amount of energy and materials that goes into building these kinds of temporary shows each year, which is something we need to question," he continued. "Perhaps this is a chance to do that."

"Maybe this year is an opportunity to understand other ways for people to get their design kick, instead of flocking to Milan en masse."

Sabine Zetteler, head of PR agency Zetteler, pointed out that many small studios and independent designers will be unable to afford to reschedule their plans to June. She encouraged them to team up with brands to explore alternatives to the annual Milan exhibition.

"Bigger problems often lead to more creative solutions; if design brands discover and pursue new strategies that don’t depend upon Milan, this could be a seminal moment for the industry," she said.

Photo of Brera Design District is by Chiara Venegoni.