Nike has designed basketball and soccer uniforms for the Tokyo 2020 Olympics that it says will be the "most sustainable" and "highest performing" to date.

The sportswear brand has created uniforms for America's men and women basketball teams, and soccer jerseys for the USA, Korea and Nigeria teams. The apparel includes outfits for competition, the medal stand and training.

Nike has used a mixture of materials with the aim to make the attire more environmentally friendly. They include polyester created from recycled plastic bottles, recycled nylon, and rubber and yarn waste from the company's factories.

"This is the most sustainable product and the highest performing product we have ever created as a collection," said Nike Chief Design Officer John Hoke.

"So whether it is on the track and field, the celebration of the medal stand, the village wear, the training wear or the other outfits they wear, everything that we are doing is 100 per cent sustainable."

On the medal stand, athletes will wear Nike Air Vapormax sneakers made with 75 per cent manufacturing waste. The design for the sneakers – a combination of various textures, colours and shapes – was influenced by the appearance of waste piles.

Nike has made the upper part from recycled polyester, which it said not only reduces waste, but also cuts down carbon emissions by approximately 30 per cent.

It also incorporates Nike's Flyknit platform, which is made by cutting yarn and fibre to exact specifications of the shoe design to produce less waste. The shoe's airbag is made from recycled thermoplastic polyurethane, TPU, a rubber-like plastic.

Nike also added its Flyease technology to the footwear to make it easier for athletes to slip into the shoes. 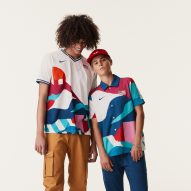 A white windbreaker jacket and matching pants, also fabricated with polyester from materials such as plastic bottles, complete the outfit.

Zipper pulls, the US Olympic emblem and Nike's swoosh logo are fashioned from recycled waste rubber that has been ground down into granules, which the company has branded as Nike Grind.

USA's soccer team will sport blue shorts with a white top for their home kit and a blue camo patterned shirt for their away kit, while the Korean and Nigerian global football uniforms honour the country's culture and traditions.

The Korean home sets feature a pattern of red trigrams that takes cues from the country's national flag, while the away version is decorated with painterly tiger-stripe design.

The patterns and colours on Nigeria's sets are also hand-drawn and reference symbolism related to the country's heritage, nobility and family.

Like the soccer jerseys, Nike has designed the Olympic basketball uniforms using 100 per cent recycled polyester and nylon.

The USA team outfit references the look of the 1996 USAB sets with its use of colour and wordmark. Twelve stars line the side of the womens' shorts to represent the 12 Olympic games the team has competed in.

Drawstring cords, zipper pulls and the Nike swoosh logo on the clothing are made using Nike Grind.

Nike has also designed the first-ever Olympic skateboarding uniforms for Tokyo 2020. All of the jerseys will be made from 100 per cent recycled polyester comprising "water bottles and other things that would go to waste," according to the brand.

The Tokyo 2020 Olympics are set to take place from 24 July to 9 August 2020. Ahead of the event the regulatory board World Athletics released new sporting guidelines that allow Nike's controversial Vaporfly shoe to be used in competition.

Nike's recycled designs follow other creations for the world sporting event that make use of sustainable practices, such as the medals, created by Japanese designer Junichi Kawanishi that incorporate old smartphones.