In our latest competition, Dezeen has partnered with Danish design brand Muuto to offer readers the chance to win a Cover Side Chair, designed by Thomas Bentzen.

Two winners, chosen at random, will receive one of the stackable Cover Side Chairs designed by Bentzen for Muuto without upholstery, in either oak, green, black or grey.

The chair has a solid oak base and legs with a veneer seat and curved backrest that is folded around its back legs.

It is coated in a environmentally-friendly water-based lacquer that, combined with its durable design, means it can be used in restaurants, offices, conference rooms and cafes.

Bentzen, who trained as a carpenter before becoming a designer, created the timber Cover Side Chair to reference the values of Scandinavian craftsmanship.

"I was born and raised in Denmark; a country where the values of craftsmanship – the notion of doing things properly to a high standard – are an inherent part of daily life," he said.

"I find that Scandinavian craftsmanship is shaped by its emphasis on quality above everything else, birthed from a desire to simplify and refine ones work for it to have a democratic appeal: making it relevant for the many rather than the few."

The final form of the seat, and its curved veneer back, was only made possible due to the quality and skill of the craftsmen that produced the Cover Side Chair, explained Bentzen. 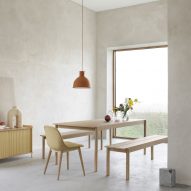 "Being a designer, the element of craftsmanship trickles down through every step of your process: from the initial sketches to small-scale models over technical drawings to making the tools for production and fine-tuning the final design for large-scale manufacturing," he said.

According to Bentzen, the end result of the design and manufacturing process is a chair that demonstrates the ideals of Scandinavian craftsmanship, at a price point that is accessible.

Muuto produces the chair in a range of colours, while textile and leather upholstered versions are available on a made-to-order basis.

"The idea of creating a design that referenced the ideals of Scandinavian craftsmanship yet at an accessible price point was fulfilled," concluded Bentzen.

"I find that moments like those serve as thoughtful reminders to myself as a designer; that I am simply a piece within a large process in which I am are largely dependent on the skilful minds and hands of others."

The Cover Side Chair follows the Cover Lounge Chair that Copenhagen-based Bentzen previously designed for Muuto. The Danish designer has also previously created a dining table and sideboard for the brand.

Competition closes 2 April. Two winners will be selected at random and notified by email. Terms and conditions apply.

This competition is a partnership between Dezeen and Muuto. Find out more about Dezeen partnership content here.