Architect Kourosh Asgar-Irani has created a collection of hand-knotted rugs featuring traditional Persian patterns that have been digitally altered to match a room's architectural elements.

The Vienna-based architect developed the Rugture collection after identifying an opportunity to apply the parametric computer software he was using in his practice to create bespoke patterns.

The patterns are based on traditional nomadic designs from Persia, Anatolia, Armenia, Turkey and southern Russia. These complex geometric designs often employ mathematical principles and are a familiar motif of oriental craft.

Asgar-Irani uses 3D computer software to manipulate the patterns in response to the layout of the room they will be used in.

Inputting parameters relating to the position of doors, windows and furniture causes the pattern to shift and results in a change in the density and colouring.

Light from nearby windows is represented by the inclusion of more white space, while the way people cross the floor between two doors is discernible as path built into the pattern.

"The biggest challenge was to make the computer generate patterns that remind you of old rugs from central Asia," Asgar-Irani told Dezeen.

"I had a clear aim that I wanted to achieve but it took around a year and a half of experimentation before I obtained real control over the pattern generation." 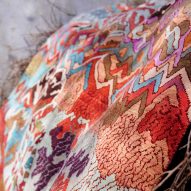 The architect explained that the Adaptive and Dynamic collections are made completely bespoke to fit the space they will be used in, while two other designs can be produced for sale through retailers.

The Classic design features a contemporary interpretation of a traditional pattern that encapsulates the project's central concept. Another design, called Modular, comprises hexagonal units that can be combined to create different layouts.

Asgar-Irani believes he is the first to use 3D computer software and his architectural background in this way to produce adaptive rug designs with parametrically determined patterns.

"Other rug designers work with 2D programmes like Photoshop or Illustrator, but I am working in 3D," he pointed out.

"This way of working with parameters and generative design methods is fully implemented in architecture but not yet in the rug industry. I want to start a new trend with this."

Once the designs are determined and the colours have been adjusted on the computer, the rugs are hand-knotted using traditional methods in the Tabris area of Iran.

The designer explained that his Iranian heritage and his feelings about the way the country is viewed around the world today prompted him to look for ways to support local artisans.

During a panel discussion at the recent Domotex trade fair for floor coverings, he spoke about how the carpet industry in Iran needs help to survive this difficult period.

"Persian rug production goes back thousands of years but all we hear about is the bad things that have happened in the past 40 years or so," he claimed.

"In a way this project can be viewed as an anti-war protest," he added. "I want to show that, despite the war, the currency fluctuations and sanctions, Iran still produces some of the finest rugs in the world."

Other rugs informed by local traditions include Artisan weaver Manju Devi's one-off rug for the Jaipur Rug Foundation, which was made by individually hand-tying 222,184 knots.

Devi's Aas Pass rug features abstract patterns and vibrant colours that were informed by her surroundings in the village of Dhanota in Rajasthan, India.