A glazed building by Kohn Pedersen Fox that swoops upward on one side has been revealed for a proposed tech campus in Detroit, Michigan.

Announced last fall, the campus for the Detroit Center for Innovation will encompass 14 acres (5.6 hectares) on the eastern edge of Detroit's downtown district.

Kohn Pedersen Fox (KPF) has designed a building that will rise on the site where the city's Wayne County Jail was under construction. Work was halted in 2013 due to cost overruns, and the building was demolished last year.

The centre is intended to be "a new gateway to Detroit's burgeoning downtown," said the architecture firm, which is headquartered in New York City.

Construction is expected to begin in 2021 on the campus, where students and faculty will be joined with entrepreneurs and business leaders. Comparisons have been drawn to the Cornell Tech campus in New York City.

"The centre will build on Detroit's growing presence as a centre for innovation, providing local businesses a pipeline of talent and offering opportunities for current workers to further their skills in a world of fast-paced technological change," the team said.

A focal point of the campus will be an academic facility designed by KPF, and run by the University of Michigan. 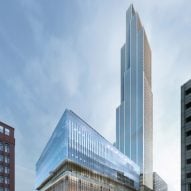 The facility is expected to serve up to 1,000 students pursuing degrees in fields such as artificial intelligence, data science and cybersecurity.

Encompassing 190,000 square feet (17,652 square metres), the multi-storey building will be constructed on the corner of Gratiot Avenue and I-375.

Renderings show a large, slanted building that stretches upward on one side. Walls are wrapped in glass, providing a high level of transparency. A portion of the lower level is carved away to establish a fluid connection to the surrounding campus.

The educational building is part of the project's first phase, which also calls for a hotel, a conference centre, and space for both entrepreneurs and established companies. Residential units are also part of the scheme.

KPF's project forms part of a number of regeneration efforts intended to bolster the economy in Detroit, which suffered a huge decline in population due to the elimination of manufacturing jobs starting in the 1950s.

The scheme recently received a $100 million (£77 million) donation from the prominent New York developer Stephen M Ross, founder and chairman of the Related Companies. Ross grew up in Detroit and studied accounting at the University of Michigan.

"Detroit has always been an incredible place of innovation and opportunity, and the Detroit Center for Innovation will usher the city into a new era of leadership in technology," Ross said.

The land for the centre will be donated by Dan Gilbert, founder and chairman of the local real estate company Bedrock.

Other projects underway in the city include a stepped skyscraper atop a glazed podium containing shops, event space and offices. Designed by SHoP Architects, the project is rising on the site of Hudson's, a famed department store that was established in the 1890s.