TV-free guest suites and an in-house yoga studio are some of the ways that hotelier Charlotte Gomez de Orozco has tried to channel a sense of serenity inside this Parisian hotel, which is decked out in natural hues.

Situated in Paris' ninth arrondissement, Hoy has been designed to be a "true hideaway" from the hustle and bustle of the French capital.

"Hoy's philosophy and purpose is to be a caring and soothing place, a door away from the street dim, for the traveller to reconnect with their energy," explained the hotel's founder, De Orozco.

"The spirit of the place is comforting, simple and allows visitors to slow down and take full advantage of the present moment, without outside distraction."

De Orozco developed the aesthetic of the hotel with the help of Sabrina Goldin and Stéphane Abby, a pair of restaurateurs who already oversee two Parisian eateries.

Together they tried to foster a "feng shui state of mind" in the 22 guest bedrooms. Feng shui is an ancient Chinese practice that claims to use flows of energy – otherwise known as "chi" – to harmonise humans with their surrounding environments.

Each of the rooms has therefore been completed with calming eggshell-coloured walls and teal-blue headboards.

Appliances like televisions have been purposefully omitted and instead replaced with stretching bars, which guests can use to limber up. Some of the larger suites also have yoga hammocks suspended from the ceiling.

De Orozco's keen interest in yoga meant she also ensured that a full-scale yoga studio was included in the hotel downstairs. 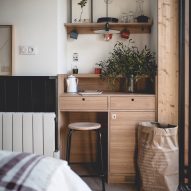 At this level there is also a restaurant called Mesa, which will exclusively serve plant-based dishes that take culinary inspiration from De Orozco's Franco-Mexican heritage.

Walls here have been hand-rendered with concrete to leave a textured surface, while warm-hued timber has been used to craft dining chairs.

The dining tables also feature veiny stone countertops and a greenery-filled planter is embedded behind a slate-grey seating banquette.

Decoration is provided by a handful of shapely ceramic ornaments and a colourful woven wall hanging.

The restaurant leads off to a couple of more casual dining areas that are centred around communal wooden tables. Richer splashes of colour appear here in the form of terracotta pendant lamps and bench seats with burnt-orange seat cushions.

The hotel also includes a Japanese florist, where bright bouquets are backed by a wall clad in creamy Zellige tiles. These are moulded, cut and glazed by hand, giving each one an irregular but unique finish.

Other hotels in Paris include Le Barn, which opened in 2018. Situated 40 minutes outside the city centre, it takes over a handful of disused 19th-century farm buildings and features rustic interiors developed by design studio Be-poles.