Danish architecture firm Henning Larsen has designed a 183-metre-tall skyscraper as part of its development of Cockle Bay Park on the Sydney waterfront.

The development will be built on two distinct scales: close to the waterfront, the low-rise "village scale" buildings  will house public and retail spaces alongside a public park.

Above it, the "city scale" part of the project is the skyscraper that will be a new addition to the Sydney skyline.

"Looking at Sydney, and especially Darling Harbor, we felt that there was a need for a destination with a different sense of scale and, within that, an opportunity to introduce a new park into the heart of the city," said Henning Larsen partner Viggo Haremst.

"A place to discover rather than just pass by. We were inspired by a more intimate scale than you find, for example, in The Rocks in Sydney," he told Dezeen.

"We felt it could be special to grow the human-scale approach of the public realm into the tower. In that way, it becomes both a human scale destination and a true urban icon on the skyline – a beacon for the people's harbour."

The buildings at ground level will contain 10,000 square metres of retail spaces alongside the harbour, while the skyscraper contains 63,000 square meters of office space.

The tower will be elevated on pillars above the ground level and broken up by green spaces inserted into the building that give the blocks an asymmetrical, floating effect.

In the building's public areas Henning Larsen chose to work with a simple palette of wood and natural stone.

"For the façade we are looking at using ceramic cladding on the closed panels, connecting to our Scandinavian heritage (not to mention nodding to the ultimate precedent of Scandinavian-Australian design – the Sydney Opera House)," Haremst explained.

"The ceramic has a beautiful ability to bend light and to reflect a sense of materiality."

Shops, bars and restaurants will be located alongside a public path that will connect Sydney's Central Business District (CBD) with the Darling Harbour. 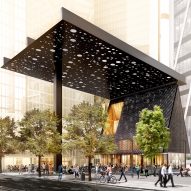 The development covers an area over the Western Distributor Freeway that previously blocked the city centre from the waterfront. The architect describes the site as "complex".

"It is a very narrow, waterfront site with the purpose of connecting to Sydney's CBD via a new landbridge that crosses over the Western Distributor (a major traffic artery)," Haremst said.

"On top of all this, we knew we wanted to use the new park as a connector to the city – the 6,500 square meter park is really a significant addition to the CBD."

The studio's design incorporates an elevated outdoor street that will cut its way through the podium and have views of the water.

"It's also partly sheltered from the prevailing wind – good in the winter, with just enough breeze coming off the water to make it an ideal spot in the summer," Harmest told Dezeen.

"Our sustainability department worked very closely with the design team to optimise the microclimate in and around the development and this research – while not necessarily visible in terms of design – makes good on our commitment to the public realm."

"We see Cockle Bay Park as an opportunity to set a precedent for people-focused design in an increasingly densifying world," Harmest said.

The Cockle Bay Park development, which was announced in 2016, has been the subject of controversy. It is opposed by the City of Sydney Council, which has plans to create a Town Hall Square in the area and argues that the development will increase the shadowing on the future square.

The Department of Planning and Environment supported the plans for the development, which was approved by the Independent Planning Commission.

The City of Sydney had previously released a draft strategy that allows taller developments as long as sunlight protections were preserved for some open spaces. But the New South Wales government, concerned about its cap on CBD residential development, did not put the strategy on public exhibition and developers are not required to adhere to it.

Henning Larsen's design beat competition from firms including Grimshaw and UNStudio + Cox Architecture to create the landmark development. The project is co-led by The GPT Group and AMP Capital.

The Danish architecture firm, which was founded by Henning Larsen in 1959, also recently revealed its design for The Arctic University Museum of Norway in Tromsø.