Burning Man is continuing with plans to host its summer festival despite a number of large-scale events like the Olympics being postponed because of coronavirus.

Burning Man announced on 20 March that it has decided not to cancel its festival, which is to take place in five months in Nevada, in response to the spread of Covid-19.

"We believe the responsible course is to proceed with caution and not make a premature decision one way or the other," said Burning Man in the statement.

"For now, we are going to continue to thoughtfully and mindfully prepare for Black Rock City 2020."

The week-long event is set to take place in the Nevada desert from 30 August to 7 September. Burning Man has decided to wait and see how the global pandemic unfolds in the following months before changing these plans.

"In the current climate of uncertainty it is simply too soon to tell," it said. "There are some indications that the virus may peak in the next couple of months and then begin to subside, while others believe the pandemic could have a much longer timeline. So much is beyond our powers to predict or control." 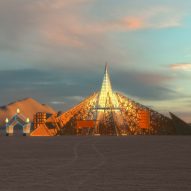 Burning Man has taken some measures regarding the recent outbreak in the US. Several regional events have been cancelled or rescheduled, and its three offices are closed and employees are working remote.

"We are taking this situation very seriously and taking proactive steps to ensure our staff and community are as safe as possible," Burning Man said. "We will continue to consider the facts and make thoughtful, informed decisions about next steps."

Events including the Olympics and Glastonbury are cancelled

Burning Man has already chosen its 2020 temple, which will form the centrepiece of the temporary Black Rock City. The design, created by Colorado architect Renzo Verbeck and artist Sylvia Adrienne Lisse, comprises an eight-pointed angular structure.

While Burning Man is set to still take place in August, a majority of other large-scale events due to happen this summer have been rescheduled because of coronavirus. These include Tokyo's summer Olympics, which is now postponed until 2021.

California's music festival Coachella, which was set for April, has been rescheduled for October, and the UK's Glastonbury music festival in June is now cancelled.