Architect Baerbel Mueller and architectural designer Juergen Strohmayer have created a multi-use gallery for the Nubuke Foundation in Ghana.

Named Nubuke Extended, the one-room rectangular building is an extension to the arts and culture institution's headquarters in Accra.

Built by the entrance to the Nubuke Foundation grounds, the elevated concrete gallery is raised above the organisation's gardens.

The shaded space underneath the buildings was designed for music events and other larger gatherings to maximise the use of the site.

Inside the building, Nav_S Baerbel Mueller and Juergen Strohmayer created an open, high-ceilinged gallery with a mezzanine level.

The versatile space can be used for site-specific artworks and exhibitions, as well as for events and performances.

The gallery also has an integrated rail system for hanging artworks, panels or curtains, creating additional ways to use the room. 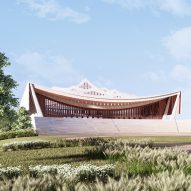 "The design of Nubuke Extended responds to this programmatic layering through a generosity of indoor and outdoor spaces that allow hosting a variety of scenarios, both intimate and expansive."

Mueller and Strohmaye wanted to create a building that resonates within its environment.

"We like to think of the building as a six-sided box and that each side has been treated with a climatic strategy," said Strohmayer.

"The lower surface of the box is raised with a green roof on top," he said. "The eastern and western walls are the more closed walls, which help keep out the strong sun in this tropical part of the world, and the ends of the tube are chopped open to create very large apertures."

"The windows have views into existing landscape features and are oriented according to the prevailing wind direction," he continued.

In addition to designing the gallery, the architects refurbished the Nubuke Foundation's existing buildings on the site.

Previously, one building was home to both exhibitions spaces, offices, storage and shops. It has now been opened up and works as a creative co-working space.

Nubuke Extended is meant to function as a cultural and civic hub in Accra's expanding metropolitan area, with both local and regional programming.

Accra is also set to get a 5,000-seat National Cathedral, designed by British architect David Adjaye. Plans for the project were revealed in 2018.