Steel stilts elevate Narula House, a British dwelling on banks of a River Thames tributary that has been designed by John Pardey Architects to endure flooding.

The wood-clad Narula House is intended to evoke an abstract object beside the river Loddon near Wargrave, which is identified as a flood zone.

John Pardey Architects (JPA) completed the house for a client who wanted a striking property that overlooked the river and offered plenty of space to entertain guests.

It is raised on stilts to keep the house and its services well above predicted flood levels, while allowing the clients to "enjoy life as if on a cruise liner" during times of flooding.

"The client had been dreaming for some time of building their own 'wow' house, a comfortable modern home to enjoy as a couple and a great place for entertaining large gatherings of family and friends both inside and outside," JPA's Chris Gray told Dezeen.

"The new house and all servicing has been raised well above predicted flood levels which allows the client to embrace flooding as part of the life on the river," Gray continued.

"During the days floating above the flood water, they enjoy life as if on a cruise liner!"

Narula House is the third dwelling completed by JPA along the banks of the Loddon, and so it was familiar with the challenges and demands that came with building in the flood zone.

According to the studio, the potential flood depth for the site is recorded as 1.17 metres so the dwelling is positioned 2.2 metres above ground to accommodate the potential threat of increased water levels caused by climate change.

"It is very much a response to this particular site and client brief, however many aspects of the design would be familiar to anyone looking to build in a flood zone," said Gray.

"The basic approach is for the house to sit lightly on the ground, keep the house and services well above predicted flood levels and allow the free-flow of floodwater across the site." 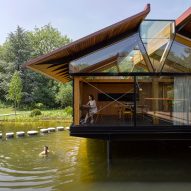 Narula House has a slender steel framed structure that is raised on piled foundations. Its site has been landscaped to allow the free flow of floodwater across it.

It is distinguished by a single, linear form that aligns with the north and south cardinal points – contrasting with the meandering river over which it looks.

"The logical placement of the house might have been to align it with the river's edge, so it would face south-east however we chose to align it so as to play off the diagonal path of the river with accommodation facing south," said JPA.

"The rectilinear house aligned with the cardinal axes counterpoints the meandering river beautifully, reinforcing both."

Narula House's materiality was intended to evoke an abstract object hovering above the meadow, and features sweet chestnut cladding with a translucent preservative coating that offers a light, white finish.

This is teamed with fibre cement panel infills around its glazed areas, and an earthy grey brick chimney structure that extends up from a ground level barbecue area.

The dwelling is accessed by an open tread staircase, which leads onto an entrance deck with a sheltered front door made from natural iroko wood.

This opens into a generous lobby area and central courtyard, which features a second staircase down to the grassy riverbank.

On the westside of the courtyard is a large open-plan living space, which has unbroken views of the river.

It is enveloped by a balcony sheltered by an overhanging roof, which JPA designed to offer solar shading.

The same roof overhangs the east side of the house, which contains the residence's private living spaces.

Branching off a linear hallway that runs the length of the house, these private living spaces include a study, utility room, cloakroom, and three ensuite bedrooms.

Throughout the home, the interiors feature deliberately simple, light finishes to help create the feeling of openness.

They are lined with timber flooring and decorated with the client's own furnishings – including many 20th century design classics – in a bid to create a "wonderful autobiographical feel".

Narula House is complete with an annexe for guests accessed from the home's main entrance via a glass-lined corridor.

The annexe takes the form of a freestanding pavilion and has a lift for access.

JPA is a Lymington-based architecture studio founded in 2000 by John Pardey.

In December 2019, Narula House's site flooded after a period of extreme rainfall that raised the water table significantly. This was captured in a photo by the client.

Other recent projects on Dezeen that are designed to endure flooding includes Bates Masi's Kiht'han house on Long Island, which is lifted above the ground and features lower-level screens to let water pass underneath.

Photography is by James Morris and drone footage is by Electric Blue.