Described by the creator as "an exercise in improvisation", the Drill Vases were born after Studio EO founder Erik Olovsson visited a quarry in the Carrara region in Italy.

Here he found small, discarded fragments of marble and started to collect the stones, before reworking their exterior form with a hammer and chisel.

These "unpredictable and chaotic" pieces of marble are then precision-drilled to form an opening from the base – the process from which the collection takes its name.

"I have always been fascinated with the stone yards and all the beautiful stones that are laying around there," Olovsson told Dezeen. "I found each of these stones interesting in its own way, and after a while I had whole collection of them."

"Some of the stones already had holes drilled in them, and the rest I drilled holes into with the idea of pairing them with a glass cylinder later on."

"Some stones will probably never be used and some are waiting for a project that suits just them," he continued.

The designer explained that some of the stones are quite fragile and break during the drilling, so the tricky part of the creation process is to re-shape these broken parts with a hammer to make them fit for purpose.

"The geometry of the handblown glass provides a sense of order and control in comparison to the spontaneity of the marble," said Olovsson. "A contrast that elevates the brute nature of the marble further."

Olovsson made the glass vases in an array of colours to match the vibrant hues found in the marble fragments – which include a midnight blue Lapis Lazuli stone, a deep green Verde Alpi marble and a light brown Travertino Noce stone.

While the designer chose to match the colour of the glass element to the shade of the stone in some pieces, in others he has deliberately paired seemingly clashing colours.

Olovsson has a long relationship with marble and glass, which spans back to a previous project of his from 2016 titled Indefinite Vases, the designer told Dezeen.

"It felt natural to me to explore these materials further – to really focus on the stone and show the imperfections and rough surfaces," he explained. 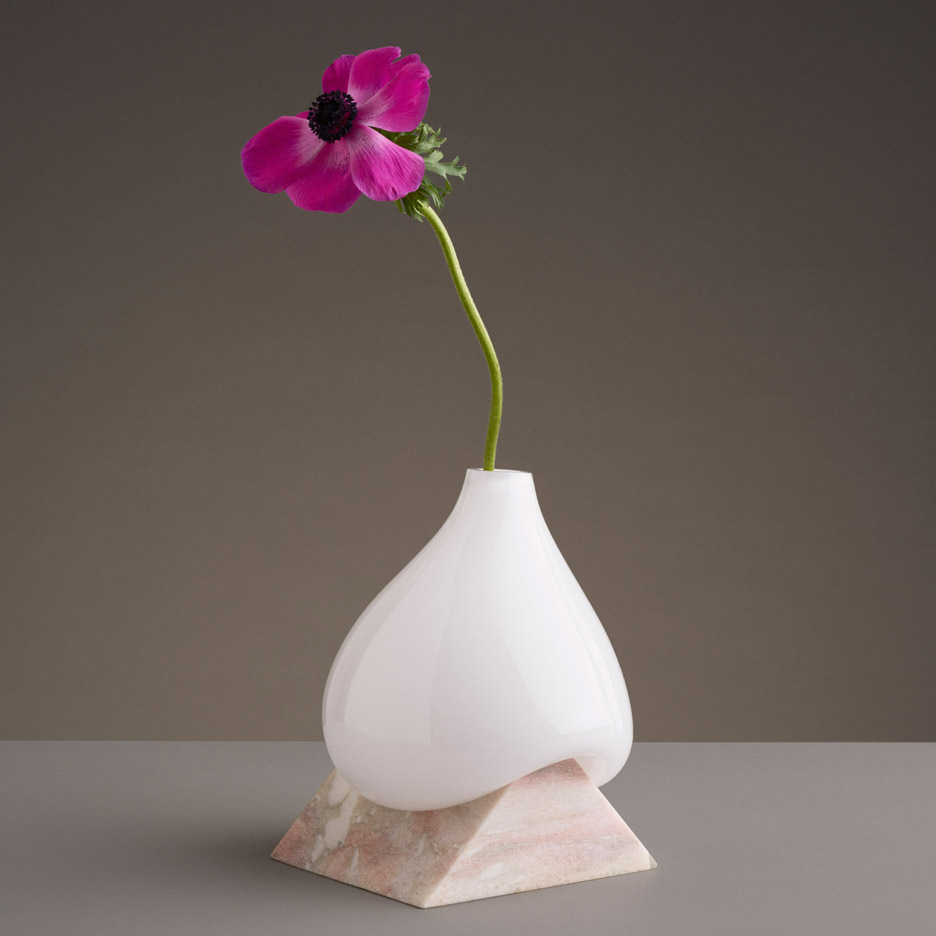 For the 2016 project, the designer juxtaposed bulbous, hand-blown glass containers with wedges of granite, marble and onyx to create vases that appear to be melting over their geometric stone bases.

Other projects of his have seen him design a shelving system that functions like a giant shape-sorter toy, made up of 25 stackable blocks that each feature a geometric void shaped like the item it might hold.