Architecture students collaborated with a women's group in Morocco to design and build a community centre out of stone and earth in the village of Ouled Merzoug.

Two volumes of granite and adobe brick sit at the intersection of two shortcuts, one leading to the village centre and the other to its schools.

Called Women's House Ouled Merzoug, the centre is a place for women in the village to gather and share their work as craftspeople with their community, and with visitors to the area.

Building Beyond Borders, a group of architecture postgraduates and academics from Universiteit Hasselt School of Expert Education (UHasselt SEE) in Belgium, created the project with the Association des Femmes d'Ouled Merzoug (AFOM).

Women's House Ouled Merzoug sits on a slope above a gully that channels water from the Atlas Mountains to the palm groves of Marrakesh during the rainy season.

The two volumes are positioned at an angle to each other. One faces the village's main square, the other the schools and football fields.

These orientations mean that one building has views of the sun rising over the mountains, and the other of it setting beyond the river,

Entry is via a communal space between the two wings. One building houses the Atelier des femmes, a workshop for spinning and weaving where AFOM can hold lessons and meetings.

A boulangerie commune, or communal bakehouse, is located in the other building. Women gather here to bake bread and pastries to sell and to share meals together.

Each building opens on to its own private garden. The workshop garden has a sink and a bench for washing and colouring wool, and the one next to the bakery has a cob oven – a wood-fired oven made from earth – that the women designed and built themselves.

As part of their research, Building Beyond Borders chose materials that could be acquired locally and sustainably, working closely with local craftspeople.

Granite rock dug out from the surrounding hills forms the outer envelope of the two structures, and adobe bricks made of earth form the inner walls.

The roof's span was determined by the maximum size of the beams of eucalyptus wood that can be bought from the local market, and the timber is thatched with reeds that grow nearby.

A carpenter from a nearby village crafted the doors, windows and kitchen counters from the same eucalyptus wood. Stairs rendered with clay lead up to terraces on the flat roofs of the single-story centre.

The women of AFOM wove the curtains from the village's sheep for the community centre, and the lamps and ceramic objects that decorate the exterior where made by their local potter. 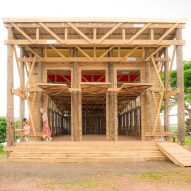 Next to the centre, the bare rocks of the gully have been forested with trees by the women and their fellow villagers to form a garden. A terraced garden with stacked dry walls built next to it is designed to slow down the rainwater when the gully floods to minimise erosion.

Using local rather than imported materials is important when building in places that are best suited to the harsh desert climate of Morocco. In the Moroccan town of Aknaibich, local workers collaborated with a pair of Belgian architects to build an extension to a school.

Photography is by Thomas Noceto.