Convention centres that have been rapidly turned into facilities for coronavirus patients should not be called hospitals, says Doug King, the healthcare principal of Stantec, which has overseen the transformation of Chicago's McCormick Place.

Stantec worked with contractor Walsh Construction to turn three halls in the centre into an alternative care facility with 3000 beds. The team, which was assembled on 26 March, was tasked to complete it within three weeks.

"We were under construction within 12 hours of contract"

"From the day we got the contract to completion of all 3,000 beds is 25 days," King told Dezeen. "We were under construction within 12 hours of contract."

"We were starting to build support spaces within 12 hours," he added. "The first 500 beds were delivered in less than a week."

Stantec's project marks the latest convention centre that has been turned into facilities for coronavirus patients – including the ExCel in London and the Javits Center in New York – as hospitals reach capacity due to the pandemic.

"That's one of the mantras – not a hospital"

But King said it shouldn't be considered as a replacement for its hospital counterpart.

King's view is echoed by Jason Schroer, the director of health at architecture firm HKS's Dallas outpost. He similarly argued that "a non-healthcare building converted to a patient care space is not quite a hospital" in an Opinion piece for Dezeen. 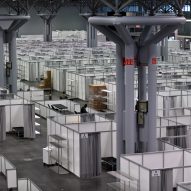 The McCormick Place facility comprises 2250 for patients that aren't diagnosed with Covid-19 and a separate area with 750 beds for those that have the disease.

King said that the main intervention was to introduce a mechanical system that created negative pressure in the areas with Covid-19 patients. Negative pressure forces air that could be carrying the virus out of spaces and helps to prevent cross-contamination.

Ductwork and fans direct contaminated air out of the centre

To achieve this, the team inserted scaffolding to create a lower ceiling in the centre – which typically reaches heights of 30 to 40 feet (nine to 12 metres) – to hold ductwork at 10 feet (three metres) high.

HEPA (high-efficiency particulate air) filters are then used to collect and suck pollutants "like a vacuum cleaner" into the ductwork.

"We directed the air into that ductwork and basically sucked it out of the building with a series of fans," King said. "So that was the largest intervention that we did."

"That flushed air goes through the HEPA filter so all of the virus is captured in the HEPA filter, which gets changed out regularly," he added. "Then it goes up into the ductwork that gets pulled to the outside of the building."

King said while it wasn't straightforward to transform the centre there were a number of advantages. For example, there are regular hubs across the floor that provide electricity, water and often WiFi that could be used for nurse's stations.

The team had to be creative with the design of each station so they connect to hubs and are also located to enable medical workers views of the patients.

"That became a bit of a design exercise that required collaboration with the contractors and for us to quickly customise every single nurse station location," he said.

King added that the current crisis, which has put extreme pressure on hospitals and medical workers, will impact the ways that hospitals are arranged and designed in the future.

He said that they will start to include specific areas dedicated to "pandemic-stricken individuals" and those that need other types of care.

"In the future, you're going to see hospitals thinking like that."