Yuichiro Hori, founder and CEO of Shanghai furniture brand Stellar Works, has relocated to New York, from where he will run the China-based business.

Speaking to Dezeen from his new base in New York, Hori explained the main reason for his departure from Shanghai is the ever-tightening Covid restrictions in China.

"For my job, I need to meet people to keep my eyes fresh," said Hori. "But staying in China for the past two years make me feel that I'm losing my fresh eyes."

"Clients from other countries are all very concerned about what's going on in China, it's very important for me to speak to them in person to reassure them that things are fine at Stellar Works," he added.

China's zero-Covid policy has seen the country locked away from the rest of the world for over two years. The new outbreak of the omicron variant in Shanghai has put the entire city in strict lockdown since March.

Business is suspended and over 25 million residents are forced to stay at home, with no clear message from the local government about when things will be fully back to normal.

Meanwhile, the impact of the lockdown on the economy is starting to show. In April, gross industrial production in Shanghai decreased by over 60 percent compared to last year, while retail sales of consumer products decreased by almost 50 percent.

Hori himself was confined at home for 60 days in Shanghai before he was able to move to New York. The production line at Stellar Works' factory in Shanghai has been suspended for two months due to the lockdown, disrupting the brand's launch schedule this year.

Stellar Works has had to cancel its presence at Milan Design Week and 3 Days of Design in Copenhagen in June. 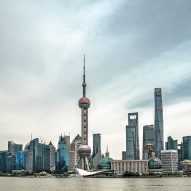 "When I first arrived in New York, I met more people in 10 days than two years in Shanghai, " Hori told Dezeen. "And they are all reachable within walking distance. New York is the city where all top brands from around the world meet."

He added that his move to New York will help the brand reach further globally.

"Based in New York, it will be good for me to focus more on the US market, which is huge for us," he said. "It's also close to London where we can easily connect to another big market in the Middle East."

"Asia will always be our home, we have 400 people in Shanghai and an established solid network."

For Shanghai, the brand will focus more on manufacturing. While in New York, Hori wants to take on more of the role of business development, sales and branding.

Hori rejected the idea that he would move back to Shanghai once the Covid lockdown in China is fully lifted. He intends to keep New York as his permanent base, and travel more regularly between Shanghai and New York if possible.

Hori founded Stellar Works in 2012. Known for its Asian aesthetics, the brand has worked with design studios including Neri&Hu, who also serve as Stellar Works' creative director, as well as Nendo and Space Copenhagen.

It currently has offices in Shanghai, New York, Los Angeles, Tokyo, and London.