Oliver Chapman Architects has added a garden room to a house in Edinburgh, combining an Arts and Crafts approach with smart-home technologies.

Flitch House is an extension to an end-of-terrace family home in Trinity, built in 1895 by prominent local architect Alexander Hunter Crawford.

To respect the house's architectural character, the extension is designed by Oliver Chapman Architects as a contemporary interpretation of the Arts and Crafts style – a movement that promoted traditional craftsmanship and honest use of materials, rather than mass production.

The garden-room extension celebrates its construction, with brick walls visible both inside and out, a pattern of ceiling beams exposed overhead, and custom furniture elements dotted throughout.

However unlike the Arts and Crafts houses of the 19th and early 20th century, the building also embraces technology, with integrated gadgets including wireless lighting and automated blinds.

The architects describe it as "Arts and Crafts without the bell pull".

"Many of the ideals of Arts and Crafts – materiality, craft, open and connected spaces scaled to different uses – are virtues that continue to be highly valued in architecture today," explained project architect Nick Green.

"The movement initially arose as a rebellion against mass production and a wave of industrialisation," he continued, "but in today's world it is modern product developments that are allowing us to maximise the performance of our building elements and create details that make the most of the materials we use."

Digital devices are not the only use of technology in Flitch House.

As the project name suggests, the design includes Flitch Beams, which are dual-beams with steel ribbons sandwiched into the centre. These give additional strength to the roof structure, allowing it to lift up at the edges, to preserve views over the Firth of Forth.

In line with the Arts and Crafts approach, these details are left uncovered and visible.

A pale Danish brick was chosen for the walls, to contrast but complement the original red brick.

"Our approach at Flitch House was to choose materials which could be both structural and aesthetic," Green told Dezeen. 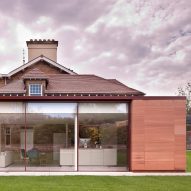 "While the new walls and roof are necessarily not as simple as they appear, with insulation and waterproofing membranes hidden from view, they nevertheless allow the basic construction of the building to be read and understood clearly."

A split-level floor divides the extension into two rooms. On the upper level is a dining space, connected to the family kitchen, while the lower level is more of a conservatory space.

Architectural details help to give these rooms extra character. Steps integrate upholstered seating areas and storage, while a projecting corner creates a reading nook, furnished with a bookcase and sofa.

"Intimate spaces, or nooks, are characteristic of Arts and Crafts houses, and we were keen to develop this idea in a contemporary approach," explained Green.

"Our clients enjoy entertaining and so we designed this nook as a discreet bar area off the new dining area, allowing the main space to be as open as possible," he said. "It references the existing panelled alcove around the fireplace in the kitchen."

The space is finished with a micro-concrete floor, which matches the colour of the garden terrace beyond.

Previous house renovation in Edinburgh include architecture studio Archer + Braun red sandstone extension to a Victorian villa and Izat Arundell conversion of a former blacksmith's workshop into a compact apartment.

Photography is by Angus Bremner.