Called Edinburgh Pavilion, the minimal extension was designed as a deliberate contrast to the existing Grade B-listed structure.

The main house is laid out as a series of formal, large and well-decorated rooms.

Archer + Braun's volume is a glazed rectangular volume with no dividing walls.

At its northern end, the extension has been clad with solid Corsehill, a red sandstone used in many buildings in Scotland.

The material picks up on the colours of both the stonework and roof tiles of the existing home.

"The contemporary stonework reinterprets the array of traditional stonemason techniques used on the existing property," said the practice.

"The primary garden elevation has a facade that is 'rubbed', a technique that results in a smooth finish, where as the secondary elevations to the side and rear of the pavilion are grit blasted."

A structure of steel columns around its edges to keep the centre of the space open.

Sides made from glass and metal connect to the eastern facade of the existing home.

Original stone walls and doors have been left untouched and are framed by the new extension.

At its southern edge, an entry into the new living area is on-axis with the home's grand, central corridor.

Modern light fittings have been added, along with a bay window seating area.

A simple white ceiling emphasises the contrast between the existing stone wall and the new metal structure. 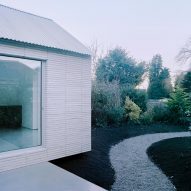 Over The Edge is a minimalist house with a cantilevered corner

Small adjustments to the interior of the existing home have helped to rationalise its layout and improve connections between rooms.

The extension's interior is arranged around a simple kitchen island, dining table and sofa.

Sliding doors in the glass walls allowing this room be opened up to the surrounding garden.

A paved stone floor continues from the extension as a patio and a pathway alongside the extension leading towards to a more formal seated garden area sheltered by hedgerows.

Archer + Braun was founded by Stuart Archer and Sarah Braun and has offices in London and Edinburgh.

Photo is by David Barbour.