German studio Architektur3 has added a triangular tower and public viewpoint to the St Georg church in Bleibach, situated at the intersection of three valleys within the Black Forest.

The cross-laminated timber tower was designed as the final element of the church, which is formed of a 16th century gothic choir and a large, tent-like hall that was added in the 1970s.

"The triangular ground plan of the tower is inspired by the design of the modern church tent, and closes off its structure on the west side," explained Architektur3 founder Klaus Wehrle.

"The steep, falling lines of the tower are also derived from the existing church and illustrate the relationship between the two buildings," he told Dezeen.

Architektur3 designed the tower's plan based upon an equilateral triangle to signify both its location – at the meeting point of three valleys within the Black Forest – and the holy trinity.

Along with being a clearly recognisable landmark, the tower contains a public viewpoint, the church's bells and is topped with a breeding space for birds and bats.

"In addition, the new church tower marks the intersection of three Black Forest valleys, gives the church more visibility and brings a new function with the viewing platform."

The public viewing platform, which sits below the bells, is accessed by a triangular, spiral staircase contained within the tower.

"For the church itself, the proximity to heaven has a symbolic value," said Wehrle. "It was also important to give all people the opportunity to experience the building and this important point where three Black Forest valleys intersect."

The 33-metre-tall tower was constructed from cross-laminated timber made from local silver fir, with Accoya used as cladding. 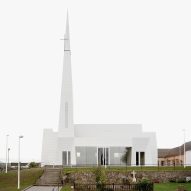 "The silver fir is the characteristic tree species of the Black Forest and thus a regional product," explained Wehrle. "In the processing as cross laminated plywood, this type of wood achieves excellent static values to absorb the vibrations of the church bells."

"Accoya wood has excellent environmental values and is very well suited as a facade material due to its special treatment and the resulting resistance to pests," he continued.

Although the tower is based on triangles, lies at the meeting of three valleys and three is a significant number in Christianity, the tower's height was not determined to make this connection.

"When determining the height of the tower, it was important to find a balanced proportion to the church stock and at the same time to be able to look out over the church roof into the valleys from the viewing platform," said Wehrle.

"The fact that the tower is exactly 33 meters-high is a coincidence with no symbolic meaning."

Photography is by Oliver Kern.