NASA will use the Danne & Blackburn-designed "worm" logo for the first time since 1992, while its astronauts will debut SpaceX spacesuits when the Demo-2 flight to the International Space Station launches tomorrow.

The astronauts will be carried aboard SpaceX's Falcon 9 rocket and Crew Dragon spacecraft, marking the first time that astronauts will travel to the orbiting International Space Station aboard a commercially built and operated American rocket. It is also the first astronaut launch from US soil since 2011.

To mark the occasion NASA has brought the curving red wordmark, nicknamed "the worm", which was created by Danne & Blackburn in the 1970s out of retirement. The logo was phased out in favour of the original 1950s "meatball" design in 1992.

"The worm is back," said NASA. "And just in time to mark the return of human spaceflight on American rockets from American soil."

"The retro, modern design of the agency's logo will help capture the excitement of a new, modern era of human spaceflight on the side of the Falcon 9 launch vehicle that will ferry astronauts to the International Space Station as part of the Demo-2 flight."

Originally planned for 27 May, the launch "was scrubbed due to unfavorable weather conditions" and rescheduled for liftoff at 3:22pm EST (8:22pm UK time) on Saturday 30 May. Behnken and Hurley are expected to dock at the space station at 10:29am on Sunday 31 May.

The worm will also decorate the front of the SpaceX-designed suits Behnken and Hurley will wear for the mission. 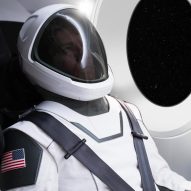 As shown in the dress rehearsal on 23 May, these will be white with grey contrast panels and piping, and detailed with an American flag on the right shoulder, alongside the astronaut's name.

The suit is completed with a 3D-printed helmet, touchscreen-compatible gloves, a flame-resistant outer layer and offers hearing protection during ascent and reentry.

The company was selected along with Boeing to develop a domestic vehicle that could launch astronauts from American soil, as part of NASA's Commercial Crew Program. The last flight from USA took place in 2011 and NASA has been sending crew from Russia since.

"This test flight is a pivotal point in NASA's Commercial Crew Program, which is working with the US aerospace industry to launch astronauts on American rockets and spacecraft from American soil to the space station for the first time since 2011," explained NASA.

Behnken and Hurley are now expected to spend a few months in the ISS with NASA astronaut Chris Cassidy and Russian cosmonauts Anatoly Ivanishin and Ivan Vagne. NASA believes the time could provide useful research in an eventual goal to send humans to the Moon and Mars.

"The goal of the Commercial Crew Program is to provide safe, reliable, and cost-effective transportation to and from the International Space Station. This could allow for additional research time and increase the opportunity for discovery aboard humanity's testbed for exploration, including preparation for human exploration of the Moon and Mars."

This mission follows the SpaceX Demo-1 flight, which saw an unmanned Crew Dragon sent to the station. It makes a major step forwarded for NASA's Commercial Crew Program, established to develop a domestic vehicle that could launch astronauts from American soil.