Christo, the Bulgarian artist best known for wrapping buildings including Berlin's Reichstag and the Pont Neuf in Paris, has died of natural causes at the age of 84.

Christo Vladimirov Javacheff, known as Christo, died in his New York City apartment on 31 May.

The artist is known for the large-scale installations that he started creating with his late wife Jeanne-Claude in the 1960s.

They include wrapping the German Reichstag in Berlin with 100,000 square metres of silver fabric, which was tied to the building for two weeks using 15.6 kilometres of blue rope. They also covered a medieval tower and a fountain in Spoleto, Italy in 1968, a 250-metre section of the Aurelian Walls in Rome in 1974, and the entirety of the Pont Neuf bridge in Paris in 1985.

"Christo lived his life to the fullest, not only dreaming up what seemed impossible but realising it," said a statement from Christo's office.

"Christo and Jeanne-Claude's artwork brought people together in shared experiences across the globe, and their work lives on in our hearts and memories." 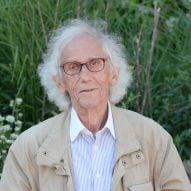 "I was so poor and I had no studio" says Christo. "I started working with little tin cans of paint"

Christo continued to produce installations following his wife's death on 18 November 2009. In 2018, The London Mastaba was installed on the Serpentine Lake in London, which marked their first major UK sculpture.

Composed of a vast stack of brightly coloured barrels, the structure was also the culmination of over 60 years of working with stacked barrels.

His latest project, L'Arc de Triomphe, Wrapped, was to envelop Paris' Arc de Triomphe in 25,000 square metres of silvery recyclable fabric and 7,000 metres of red rope. Christo's office said it will continue to produce the work with the ambition to complete it next year.

"Christo and Jeanne-Claude have always made clear that their artworks in progress be continued after their deaths," it explained. "Per Christo's wishes, 'L'Arc de Triomphe, Wrapped' in Paris, France, is still on track for September 18 – October 3, 2021." 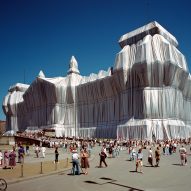 "Every interpretation is legitimate, even the most critical" says Christo of his artworks

An exhibition about Christo and Jeanne-Claude's work will also open at the Centre Georges Pompidou in Paris on 1 July.

Christo was born on 13 June 1935, the same day as Jeanne-Claude, in Gabrovo, Bulgaria. He told his life story and discussed some of his best-known works in an exclusive two-part video filmed with Dezeen last year.

"I was born in Bulgaria and I escaped from the communist country to the west on 10 January 1957," he explained in one of the movies. "I met Jeanne-Claude in November 1958 and we together fell in love."

The monumental artworks had no specific meaning and were open to interpretation, Christo told Dezeen. "In the end, Jeanne-Claude and myself would always say, we do not know what the project is," he said. "Every interpretation of the project is legitimate, even the most critical and the most positive."

He adds: "This is why I enjoy these projects. They have open dimensions that absorb everything."

The photo is by Dezeen.