Two ex-Samsung engineers from tech company CoreDAR have designed a tiny LiDAR device called Glamos that can turn any screen into an interactive, but touchless, touchscreen.

Measuring at just 1.5 inches, the pocket-sized Glamos has been billed by its creators as the "world's smallest LiDAR device" with the least power consumption.

The motion sensor employs LiDAR (light detection and ranging) technology, typically used by autonomous vehicles to detect obstacles, to create an additional, virtual touchscreen in place of the one on the user's own device anywhere they desire.

Compatible with phones, laptops, tablets, desktop computers and smart televisions, Glamos automatically scales the size of the device it is connected to.

Once connected to a device, ordinary screens are able to identify and respond to gestures made in the air, without the user having to physically touch the screen.

"While experimenting with LiDAR technology at Samsung Electronics C-Lab, I saw the potentials of the technology," said CoreDAR founder Charles Lee.

"I wanted to create a LiDAR device that's smaller and more affordable – a device anyone could use anywhere."

The sensor uses a rotating mirror module instead of a camera to scan its surroundings within a three-foot radius, measuring the distance between itself and other objects before transforming the data into a touch coordinate, and sending the coordinate to the display screen. 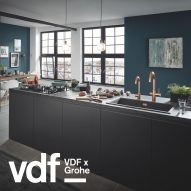 "On laptops, you'll feel like your hands are an extension of your mouse cursor," said the creators.

According to its developers, the Glamos device is particularly suited to giving presentations at the office or school, watching content without having to use the remote, or for using electronic devices when cooking to avoid getting them dirty.

It can also be used to bring mobile games to life for multi-player or a Nintendo Wii-like experience. If Glamos is connected to the user's phone, the content or game being played on the phone can be projected onto a bigger screen using an HDMI cable.

The technology can also be projected onto walls, whiteboards or in the air.

"Instead of playing Candy Crush on your tiny phone for hours, you can play it on a TV screen and turn it into an exciting social activity," said the designers.

In its current form, Glamos has been released as a working prototype after over 100 iterations and tests. The creators are continuing to work on the final hardware design before taking it to mass production.

The design comes at a relevant time in light of the Covid-19 pandemic, when an increasing number of consumers are looking to touchless objects to avoid the spread of bacteria and viruses. 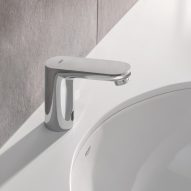 Chief design officer at water technology brand LIXIL, Paul Flowers, explained how demand for touchless products such as toilets and taps is growing fast in shared buildings and their common areas.

As Flowers explains, it is "entirely feasible to create an environment which eliminates the need to touch surfaces" thanks to technology like automatic doors and sensors.