Called Mistral, the project is the latest that Laurent Deroo Architecte (LDA) has created for Atelier de Production et de Création (APC) as part of their 15-year-long partnership.

The volumes are used to create spaces within the store's shell instead of adding permanent walls. They are constructed from aluminium sandwich panels produced by Panoramar in Paris, which have a honeycomb core and are both rigid and lightweight.

Marine-grade Okoume plywood panels are then used for portions of the walls, floors, ceilings and shelves. Their warm tone contrasts with the metallic.

LDA describes the units as "cabin modules", with the wood offering a nautical touch and the silvery, industrial quality resembling aviation design.

The APC store has a rectangular floorplan with two square-shaped Mistral volumes in the rear forming display nooks for clothes and accessories. A lower level, accessed by a white staircase, contains another metallic pod.

Pathways and corridors are created between the "cabins", with natural and artificial light enhance the experience. "Customers go through these modules, discover the collections, inside and around these technical boxes, in a clever framing, light and path choreography," said LDA.

Aside from the units, the rest of the 232-square-metre space is pared down with white walls and exposed ductwork. A storefront window topped with arched brickwork overlooks Floral Street.

"The existing space hosting these modules remains stripped of all artifice to keep only the fundamental technical networks and basic modules to build a shop that brings you back to basics: achieving a lot with minimum," said LDA. 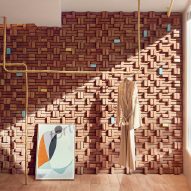 The studio, which has created over 50 stores around the world for APC, has also applied the Mistral concept to a new store in Brooklyn's Williamsburg neighbourhood. It believes it offers a way to create a unique spatiality for each store, describing it as an "ingenious, minimal, even brutal architectural proposal".

LDA was founded by Laurent Deroo in Paris in 2008. It is a 10-person team that works mostly fashion and luxury but has residential and hospitality projects as well.

Other clothing stores in London include Forte Forte with brick walls and golden details, Mira Mikati by Yinka Ilori and an outpost for Stockholm-based Eytys with taupe interiors.

Photography is by Ben Benoliel.