Architecture studio Cobe and engineering firm Arup have designed the elevated Orienktaj and underground Nordhavn Metro stations as part of a docklands development in Copenhagen.

Both stations form part of the redevelopment of a large area of docks to the north of Copenhagen to create 40,000 homes and office space for 40,000 people, which is being masterplanned by Cobe.

The elevated Orienktaj station is designed to be a landmark structure within the development.

"The Orientkaj station was designed as an elevated metro station, creating a striking experience for passengers arriving from the underground metro, with views over the Orientkaj dock and the water," said Cobe founder Dan Stubbergaard.

"The idea was for the station to become a local meeting point for residents and visitors, sort of a destination in its own right: the station gives the Nordhavn area both energy and cohesion," he told Dezeen.

The elevated station is supported on a central concrete column and two triangular concrete supports that continue around the station's platforms to enclose the raised building.

Described by Cobe as "concrete claws", these forms and the aluminium platform building were derived from its location in the working harbour and the cranes and shipping containers that can be found nearby .

"Orientkaj station celebrates the industrial architecture of the harbour," said Stubbergaard. "The station outline is a large, bold and simple silhouette evoking the cranes, containers and warehouses you see in the docklands." 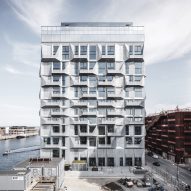 "The harbour is also drawn out by the use of materials, such as concrete and anodised aluminium panels across the facades, roof and soffits – the pleated cladding also mirrors the unique quality of seaside light and the water itself," he continued.

Two concrete stairs lead to the platform building, which is located between the tracks. Glass walls and doors were designed to give passengers views across the surrounding docklands, while the roof is made up of numerous skylights.

"Inside the station, the skylights also mirror the triangular shed roofs of industrial buildings, and flood the station with horizontal light - fairly unique for a metro station," added Stubbergaard.

The second station is underground and shares some characteristics with the elevated station and the wider network that it connects to.

"Each station was designed to respond to its unique local context, to better serve the people and the neighbourhoods it connects," said Arup’s lead architect, Kristian Winther.

"The design of each station is fundamentally unique and yet they both share the same metro design language: they are designed from a passenger's perspective, rather than that of the train; and they also both respond to their local urban context."

"The overground Orientkaj station responds to its harbour side location: it is a white station that responds to the surrounding neigbourhood of the growing Nordhavn development, known as the white city," he continued.

"The underground Nordhavn station follows the design approach of the Cityringen metro line, with the red cladding signalling a transfer station."

The design of both buildings aimed to put wayfinding first, but also incorporate playful elements.

"The transfer corridor in Nordhavn station is clad in pleated ceramic panels that change colour to reveal different hues as passengers move through," said Winther.

"In Orientkaj station, the pleated aluminium cladding reflect and amplifies the unique, horizontal quality of the harbourside light and the water."

The stations form part of the redevelopment of the Nordhavn area of Copenhagen, with the metro line expected to be extended to form a loop around the development. A further five stations are planned with Orientkaj designed as the prototype for the group.

"Copenhagen's metro authority, Metroselskabet, asked us to design Orientkaj station as a prototype for any future stations along the Nordhavn metro line: the logic of the station outline would remain the same, while elements such as the staircases and lifts can be configured to best suit each site," added Stubbergaard.

Copenhagen-based architecture studio Cobe has built numerous structures in the city including the Red Cross Volunteer House, the wedge-shaped Tingbjerg Library and Culture House and an apartment block in a former grain silo, which is located near the Orienktaj station.