Architecture studio KennedyTwaddle prioritised privacy in the construction of this pitched-roof housing development, which has been built on a awkward plot in Finchley, north London.

The brownfield site was originally a timber yard, but up until recently had been host to a handful of severely neglected buildings and a disused two-storey office – all of which were overlooked by surrounding properties.

Dalston-based KennedyTwaddle therefore had to focus on providng privacy as it transformed the site for residential use, opting for low-lying single-storey structures that could evade the prying eyes of neighbours.

Three homes have been built on the plot, each have their own courtyard. A pair of apartments was also created in the former office building, which had to be mostly rebuilt.

All five of the homes, which are collectively known as Spencer Courtyard, are topped by a pitched roofs, emulating the form of some of the properties nearby. 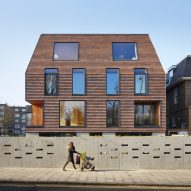 The roofs have also been planted so that, including the courtyards, 75 per cent of the housing development is covered by greenery – a far cry from the "hostile concrete" which the studio said used to pervade the site.

"From the flora and fauna to the wildlife, control of drainage and thermal benefits, the decision to plant green roofs makes the project," explained the studio.

Wheat-coloured bricks have been used to clad the exterior of the homes and have been double-stacked in some areas to form a textured surface.

Alternating bricks have purposefully been left out of the privacy screens that wrap around the courtyards. As the sun moves across the sky during the day, the perforations create striking shadowplay.

"The movements of the shadows give a sense of calm with the ever-changing patterns," added the studio.

Inside, the studio kept the colour and material palette largely natural. The underside of the homes' pointed roofs have been lined with spruce plywood, finished with a clear stain so that inhabitants can still see the wood's grain.

Supporting beams have also been left exposed to lend the interiors a loft-like feel.

Parquet wooden flooring runs from the kitchens, which feature timber-framed cabinetry, through to the open-plan living areas and bedrooms.

These spaces are all fronted by expansive panels of glazing to let in an abundance of natural light.

KennedyTwaddle was founded in 2000 and is led by architects Gary Kennedy, Chris Twaddle and Ibai Ortuzar-Yandiola. Its Spencer Courtyard project is one of London's latest design-focused housing developments.

Other include The Rye Apartments by Tikari Works, which are covered externally with rust-red shingles and 95 Peckham Road by Peter Barber Architects, which has balcony covered facade.