Rust-red tiles completely cover the facade of these angular apartments in south London, which Tikari Works has designed to have a "sibling relationship" with neighbouring properties.

Situated on a corner plot opposite Peckham Rye park, The Rye Apartments consists of two angular, shingled buildings that are host to six and four homes.

They take the place of a post-war building and four garages that had fallen into a state of disrepair and subsequently had to be demolished.

When it came to designing the new apartments, Bermondsey-based Tikari Works wanted them to be in dialogue with nearby properties, particularly a red-brick Victorian terrace.

The studio decided to apply rust-red shingles across the entire exterior of the buildings, including their pointed roofs which feature photovoltaic panels.

"The materiality of the shingles helps to create a familiarity with the red or brown brick context," the studio explained.

"Through a process of transformation, the buildings share a sibling relationship with their neighbourhood and with each other, without relying on pastiche or obvious reference."

The facade is interrupted by different-shaped windows – some of them are huge squares, helping to flood the interiors with natural light, while others are slimmer and bend in line with the building's eaves.

Trapezoidal openings look through to the apartments' balconies.

To enhance the visual connection between the apartments, the studio has perched both buildings on top of concrete plinths.

These extend to form privacy fencing at street level.

The frame of the building is constructed from cross-laminated timber (CLT), selected for its lower level of embodied carbon compared to typical construction materials like concrete and steel. 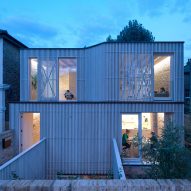 This has been left exposed across the apartments' gabled walls and ceilings, lending living spaces a cosy, more domestic feel.

Spruce wood has then been used to craft the kitchen cabinetry, storage units and shelving. Terrazo-style flooring with amber and cream-coloured flecks runs throughout.

Brick-red quarry tiles line the hallways and surfaces in the bathroom, in a wink to the building's exterior.

The Rye Apartments is the latest housing project to join the trendy Peckham neighbourhood – earlier this month, Peter Barber Architects completed a pale-brick tenement block that features a series of roof terraces.