Nike has released its new Flight ball for the 2020/21 Premier League that has geometric grooves and sculpted chevrons to reduce drag.

The product of eight years of research and development by the Nike Equipment Innovation Lab – and 1,700 hours of testing – the Flight ball grants 30 per cent more accurate flight trajectory than its predecessor.

The ball, which was released on Nike's website on 29 June, will be used in the next 2020/21 Premier League season.

It incorporates Nike's new patented AerowSculpt technology, which sees moulded grooves indented across its surface – much like how the dimples on a golf ball function.

As Nike explains, while all footballs have some unpredictable movement in flight, if the ball is entirely smooth then it is more likely to be gripped by the air, causing turbulence and thus frequent changes in direction.

"These shifts can result in misplaced long balls, derailing a potentially fruitful counter, or shots that stray off goal," the brand added.

The indentations in the Flight ball work to reduce "wobble", offering a more predictable and consistent flight, by encouraging air to move around the ball instead of gripping its surface. 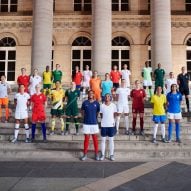 "Over the course of the 68 iterations, we modified the shape of the groove, added sculpted chevrons and explored multiple features throughout to deliver one geometric pattern that helps promote a more stable flight," he added.

The ball is constructed from four fuse-welded panels, as opposed to a usual 12, which are stitched together with 40 per cent fewer seams than an ordinary football. This makeup affects both how the ball flies and how the player can touch or kick its surface.

It also is printed with Nike's All Conditions Control (ACC) 3D ink, which is used to print "micro flaps" along the surface to ensure optimal grip in all weather conditions.

Nike's innovation lab worked with various players to address these aerodynamics issues in three stages, which it has labelled explore, recreate and innovate.

In the explore phase, the Nike lab used various tracking systems to measure the ball flight of different types of kicks performed during a game.

The recreate phase saw the researchers replicate the kick styles seen on-pitch with a robotic leg in order to measure any small differences in performance between different ball designs.

In the final innovate phase, the lab tested 68 different iterations of the Flight ball and had over 800 professional athletes participate in field testing validation before settling on a final version.

Dezeen recently spoke to Nike's sustainable design lead Noah Murphy-Reinhertz about the impact of the current Covid-19 pandemic, and how it will affect the current climate crisis. 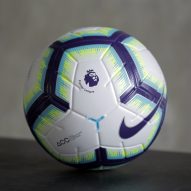 "Right now we're in the midst of two global crises," he told Dezeen. "One is super visible that we're experiencing and immediately it's put us all back into isolation for a few months."

"But the other crisis that's happening at exactly the same time is one that could put us all inside air-conditioned homes and gyms for the foreseeable future."