Swimmers in New Hampshire's Willy Lake can climb up this floating installation made from recycled HDPE plastic by architecture firm Bulot+Collins and dive back into the water.

Iceberg is a diving platform constructed as a play surface and place to overlook the forest landscape in the town of Strafford. Bulot+Collins created the structure with a group of children during the Beam Camp in the summer of 2019.

"Rising from the middle of the lake, the Iceberg pushes further the limits of campgrounds, and offers a new vantage point on its surroundings," Bulot+Collins said.

The angular sculpture has a frame constructed from locally sourced wood that rests on empty flotation barrels. The structure is clad in 1,400 handmade thermochromic tiles fabricated from recycled high density polyethylene (HDPE).

To make the cladding, the studio and the campers melted and moulded recycled HDPE into triangles. The shapes were then coated with resin and a thermochromic pigment, which changes colour when exposed to temperature changes.

Depending on how the sunlight hits the installation the tiles will change from blue to white, which the studio said mimics the appearance of a melting iceberg.

"Once the tiles are glued onto the structure, their glistening surface turns from different shades of blue in the cold to a polar white in the heat, so that the iceberg would appear to progressively melt under the sun,"  the studio added.

"In addition to offering a stimulating sight, the responsive quality of the structure to its environment addresses in a lighthearted and poetic manner the heavy issue of polar ice melt." 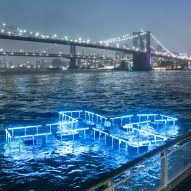 In the centre of the floating installation, there is a set of stairs that leads to a 10-foot-high (three-metre-high) diving platform where campers jump into the water.

At the base of the structure there is an additional diving point set a lower height and an area to sit or sunbathe.

A curved metal railing and series of steps attach to the lower platform for divers and swimmers to climb back on top. To access Iceberg from the shore the campers row to it and tie their boats onto hooks attached to the edge of the structure.

Iceberg was selected as part of an international design competition hosted annually by the camp and was built on-site in 2019 over a three week period by the campers, aged 10 to 17. Camp programming was cancelled this year due to the coronavirus.

"As architects accustomed to working in an environment where the designer, the client and the users are often three distinct parties, we were stimulated to have the future users play an active role in the building process of the project," the studio said.

Other installations built on bodies of water include Bulgarian artist Christo's London Mastaba, a colourful sculpture in Serpentine Lake and plus sign shaped sculptures with LED lights that change colour to report on current water conditions in New York’s East River.