A shiny brass wardrobe that's meant to resemble a precious jewellery box features in this apartment near Barcelona designed by Raúl Sánchez Architects.

The Magic Box Apartment is set within a two-storey home in the town of Viladecans and is occupied by a married couple and their two young daughters.

The husband's parents live on the first floor, while his grandparents used to live on the ground floor.

When they sadly passed away, the husband made the decision to turn the 110-square-metre lower level of the home into an apartment for his own family, allowing him to stay close to his parents upstairs.

Raúl Sánchez Architects, which is based nearby in Barcelona, was tasked with carrying out the refurbishment works.

The practice decided not to make any major changes to the floor plan of the home, which is split in half by a longitudinal structural wall.

This wall instead became the "backbone" of The Magic Box apartment, separating the sleeping quarters from the living rooms.

One large room has been turned into bedrooms for the daughters. In place of a traditional partition wall, a jewellery box-style wardrobe divides the two rooms. It rises up just over two metres and is clad entirely in panels of shiny golden brass.

The girls can slip between each other's rooms using the "secret passageway" in the middle of the wardrobe, a feature which the practice included to "increase the spatial experience and interior complexity".

"I always thought of the 'magic box' as one of those old jewellery boxes, which, when you opened them, a little dancer started moving and some music starts sounding," said studio's founder, Raúl Sánchez. "In my memories those jewellery boxes were golden."

"In any case, I love brass, and in this precise project it gave that magic look, that look of a precious object," he told Dezeen. 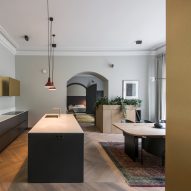 The practice has utilised a variety of materials and colours throughout the rest of the house to define different spaces.

For example, white micro cement has been applied to the floors of "service areas" like the bathrooms and corridors, contrasting the oakwood floorboards that appear elsewhere.

Stainless steel has then been used for the inner lining of all the doorways.

"It marks the passage of spaces that, despite being open to each other, change their function," Sanchez explained.

The corner of the sitting room has also been partially painted vermillion red, and wide stripes of peachy orange have been created onto the panelled doors of the girls' bedrooms.

One wall of the kitchen, which features a slate-grey breakfast island and cabinetry, has additionally been painted sky blue.

These new decor details sit alongside original details that have been preserved by the practice, like the barrel-vaulted ceilings.

All of the existing windows were also restored, bar one in the apartment's kitchen which was expanded to offer better views of the luscious garden outdoors.

Brass is often the material of choice for architects and designers looking to add striking details to residential projects. Interior designer Kristina Lastauskaitė-Pundė used the gold-hued metal to clad the doorways and kitchen cupboards of a 19th-century apartment in Vilnius, Lithuania.

Architect Jean Verville also created a "golden ribbon" inside a Montreal flat by covering a series of walls in brass.