Eighty artists and activists have written cloud-like messages in the sky made from water vapour to protest immigration policy and mass incarceration in America.

In Plain Sight is a project founded by Cassils and Rafa Esparza that involves a group including the Black Panther Party's former minister of culture Emory Douglas, Black Lives Matter co-founder Patrisse Cullors, and artists Dread Scott and Bamby Salcedo.

The messages were written in the sky with water vapour emitted from small planes flew above jails, detention centres and border locations in California, New York, Texas, Arizona, New Mexico, Georgia and Louisiana over Independence Day weekend, 3 to 4 July.

Phrases included "Care not cages", "Health is wealth", "Stop crimmigration now" and "Arrest ICE" to protest the detainment and treatment of thousands of immigrants in detention centres under Customs and Border Protection and the Immigration and Customs Enforcement (ICE).

"As the planes soar, they will make visible in the sky what is too often unseen and unspoken on the ground: the appalling, profoundly immoral, imprisonment of immigrants," said In Plain Sight.

"In Plain Sight will help break through this wall of secrecy, exposing to public scrutiny the sites of detention centres, paid for with your dollars and operated in your name."

Several of the artists chose to write phrases in Spanish, Farsi, Urdu and Arabic while others wrote the names of detained immigrants such as "Carlos Ernesto Escobar Mejia", the first immigrant to die of coronavirus in a US detention facility.

In Plain Sight intends to create more messages over more locations this weekend. 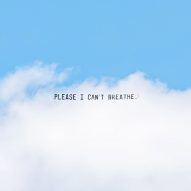 At the end of each phrase is the hashtag #XMAP, the name of the website created as part of the initiative. The website provides information about the project and artists and also has an interactive map that shows where each message was flown.

To offset the carbon emitted by the planes the project has estimated that each 30 minute period of skywriting can be negated by planting five trees.

Artist Sam Van Aken has offered his genetically-grown Tree of 40 Fruit, which produces forty varieties of stone fruit, to be planted near detention and incarceration sites.

Last month Dallas artist Jammie Holmes flew banners above American cities showing the final words of George Floyd, who was killed in police custody in Minneapolis on 25 May. The project coincided with the mass protests across the United States demanding racial justice.

Other installations that challenge US immigration policy, including the pink seesaws stuck between the slats of the US-Mexico border wall by Rael San Fratello and a number of inventive border wall proposals by IKEA and New World Design.