Aurora Arquitectos has united two classroom blocks at the Artave music school in the village of Caldas da Saúde, Portugal, with a bright yellow extension and stair tower.

The architecture studio renovated two classroom blocks that were located near each other and improved the circulation by adding an L-shaped extension, which connects the two buildings and creates open areas for meetings.

To clearly differentiate the addition from the existing structures Aurora Arquitectos chose a bright colour for all of the extension's visible exteriors.

"The general concept was to create a connection between two existing buildings that worked as a space of meeting and relaxation during breaks," said co-founder of Aurora Arquitectos Sérgio Antunes.

"We wanted this body to be independent in its architectural language so that it could be possible to read the existing buildings," he told Dezeen.

The most visible element of the extension is a large stair tower that projects into a courtyard alongside the classroom blocks. Following the threads of the stairs, the structure protrudes above a concrete amphitheatre created in the courtyard.

"We hope it becomes an attraction point on this campus, where everything converges," said Antunes. "The point on which you can go everywhere."

Aurora Arquitectos chose yellow for the stair tower, and other facades, to make the building stand out even on gloomy days. 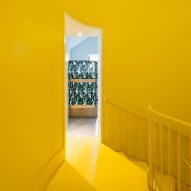 "This project is located in a region of Portugal where it rains a lot and where the days in the winter can be very gloomy," said Antunes. "This building intends to be a counterpoint, and the yellow was a way to emphasise that contrast."

The bright colours continue within the extension where the walls were painted bright orange and the floor bright red.

This was designed to contrast the extension's ground floor and the renovated classrooms where greys were utilised by the architecture studio.

"The remaining colours are calmer," explained Antunes. "The ground floor is in tones of grey in order to allow the yellow to float on the upper floors, increasing its contrast," he continued.

"When one passes from a neutral to a yellow space, the effect is so strong that it seems you are breathing a different air."

Aurora Arquitectos is a Lisbon-based architecture studio led by Antunes and Sofia Couto that was established in 2010. The studio previous created a brightly-hued hostel that within an old family home and turned a ruined building in Lisbon into fun family home.

Photography is courtesy of Aurora Arquitectos.