A number of leading architects and designers such as John Pawson, David Chipperfield and Marcio Kogan have unveiled residential designs for a development in Ibiza.

Called Sabina, the private community is currently under construction on Ibiza's west coast. The project spans 17 hectares and is led by British developer Anton Bilton, who is the co-founder of Cotswolds community The Lakes by Yoo.

Eighteen architects and designers have been enlisted to create private villas for Sabina, and they are based around the world including the UK, US, Brazil and Spain.

Marcio Kogan, the founder of Studio MK27 in São Paulo, and Paris- and Tel Aviv-based studio GSARCH, formerly known as Gottesman-Szmelcman Architecture, are also involved in the project.

Despite this range of designers, the house designs for Sabina share a similar aesthetic in their clean lines, flat roofs and minimal yet natural palette inside and out. Green roofs, white exteriors, sliding glass walls and outdoor swimming pools also feature.

Among the homes unveiled so far is Pawson's residence that is embedded into a sloping site with stone walls. An outdoor pool is enclosed by walls and is akin to the one he designed at Jaffa hotel in Israel.

"At Sabina we're doing something very special and different, creating a place on this beautiful island where people can feel part of a community, but also lose themselves in their surroundings," Pawson said.

"The feeling of being out in wild nature is exhilarating and I always knew I wanted to preserve something of this in the experience of inhabiting the architecture."

Another white, low-slung dwelling has a rippled roofline, which Mateus designed with walls that slide open to fuse the interiors with a patio. Inside, an arched ceiling frames the pool.

"We wanted our designs to surpass mere function, daily life and the simple occupation of a space," the Portuguese architect said. "So we set out to treasure both the social and public components of each villa, providing a private courtyard for each space to cherish calmness."

Chipperfield's concept for Sabina is a contemporary villa with expansive portions of glass to usher in views of the seaside.

"Our approach at Sabina is to bring the views of the bay and the hills into the interior and exterior living spaces as well as integrating with the immediate surrounding context and its topography," said Chipperfield.

"The seamless sequential arrangement of social and private spaces creates a comfortable and calm domestic realm." 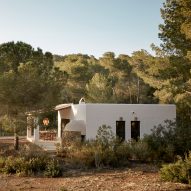 Spanish designers Rolf Blakstad, Jordi Carreño and Jaime Romano have already completed Sabina's first 13 villas. Carreño has also created the masterplan for Sabina, while Blakstad has designed a clubhouse for the development.

Many of the villas will have five to eight bedrooms and range from 510 square metres to 2,100 square metres. The majority will be situated on elevated plots and have views of the Mediterranean sea and mountains.

The development also incorporates a number of sustainable designs such as water preservation, use of local materials, energy efficiency, waste management and pollution reduction.

It is Spain's first residential development of this size to have a certificate of excellent from BREEAM, which is a leading sustainability assessment method.

In addition to Sabina, Ibiza is also home to members-only retreat La Granja with a rustic "back-to-basics" design.

The Spanish island has a number of hotels as well that combine contemporary living with farmhouse details.

Renders are courtesy of Sabina, Visualizers and Studio MK27.