Wall House is shared by a mum, dad, their two children and their grandmother and grandfather.

When it came to briefing CTA, also known as Creative Architects, on the design of the two-storey house, the clients didn't have any strict ideas about how it should look aesthetically but specified that the living spaces should feel bright and airy.

"Therefore, most of our discussions with the house owner tended to the idea of a house which is able to 'breathe' 24/7 by itself."

The practice decided to construct most of Wall House's exterior using perforated square bricks that allow fresh air and natural light to seep in from the outdoors.

All of the bricks were salvaged from the building sites of properties nearby and have been punctuated to feature four small holes.

The practice also saved burnt and blackened bricks and have interspersed them across the facade to form dark patches of colour.

Instead of being arranged in a traditional gridded formation, the bricks have been haphazardly stacked to create an irregular, bumpy surface finish. 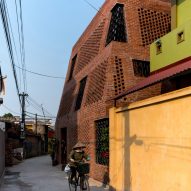 A wide flight of tiered stairs leads up to the front entrance. The steps have been printed with a holey pattern that matches the bricks on the facade.

Inside is an expansive living area illuminated by two large square windows that have been made in Wall House's front elevation. Sunlight also filters in from the home's glass roof.

To enhance the sense of the outdoors, the practice has created a small "garden" around the periphery of the room by planting an array of leafy green plants and trees.

The practice has otherwise kept the material palette of the home very simple – exposed-aggregate concrete covers the floor and dark wood has been used to craft the cabinetry in the kitchen.

A black-metal staircase with a wire-frame balustrade leads to the first level of the home. The bedrooms here and those at ground level are arranged around a void that extends up through both floors.

The practice's Wall House joins a growing number of striking brick homes in Vietnam – back in 2018, H&P Architects wrapped two layers of perforated brickwork to create the angular exterior of a house in the capital city of Hanoi.